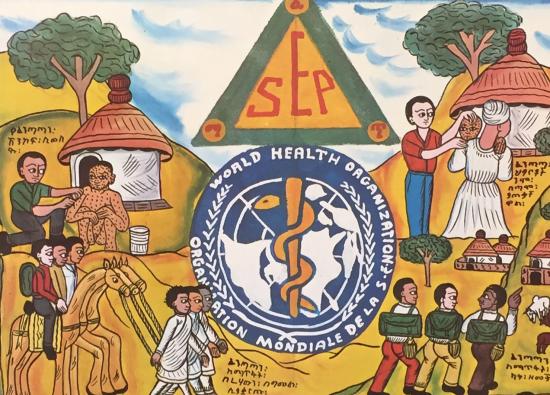 Folk wisdom had long held that people who contracted cowpox, a much less dangerous disease than smallpox, were immune from smallpox. In 1796, Edward Jenner, a country physician in Britain, demonstrated that vaccination (injection with cowpox) was not only as effective but also safe.

Throughout the 19th century, vaccination became increasingly common and by the mid-20th century, smallpox was on the decline across the world. Yet even as it declined, smallpox lingered in less developed areas of the world. Increased travel in the 1950s meant that the presence of smallpox even in remote areas presented a hazard to unvaccinated Americans and others who lived in countries which had successfully eradicated the disease.

Early estimates of the number of people who would need to be vaccinated to break the global chain of infection were in the range of 1.5 billion, with many of these people living in some of the most remote and inaccessible areas of the world. Mass vaccination would also require finding and training people to vaccinate others.

During the eight years of planning which preceded the launch of the smallpox eradication campaign, WHO leaders looked for an easy and cost-effective way to administer the vaccine. By the official start of the smallpox eradication campaign in 1967, the WHO had found the answer: the jet injector. Nicknamed "la pistola de la paz" in Nicaragua and "shanti ki handuk" in India, the jet injector was widely hailed as "the peace gun." A gun-like device that administered painless injections without needles, the injector was the brainchild of Robert Hingson, an American physician. 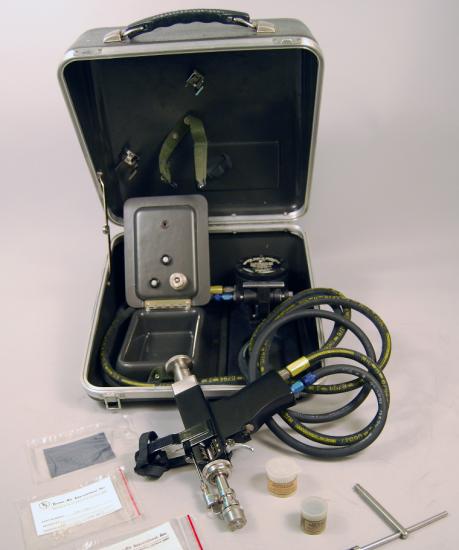 Hingson's device used a piston to propel the vaccine at a rapid speed into and under the skin—the vaccine moved so quickly and under such pressure that no needles were needed. Public health practitioners gleefully noted that this method of vaccination was so painless that it could be used on a sleeping baby. But best of all, the jet injector could hold 500 or more doses of vaccine, meaning that hundreds of doses could be delivered within an hour.

By the late 1950s, WHO officials had begun eyeing the jet injector, seeing it as the perfect mechanism for a mass vaccination campaign. But two problems remained before the jet injector could be used in the smallpox eradication campaign. First, the vaccines that had been administered with the jet injector were injected subcutaneously, that is under the skin. Smallpox vaccine, however, needed to be inserted intradermally, that is between the layers of skin. Second, developing a jet injector that could deliver the dose intradermally would only resolve part of the problem—jet injectors were powered by electricity, which made using them in remote areas impossible.

Aaron Ismach solved both of these problems, first by creating a special nozzle that delivered the vaccine intradermally and then by developing a pedal-operated and hydraulically powered model of the jet injector. Early in 1965, a pilot vaccine project was conducted in Brazil. Widely hailed as a success, this project proved not only that the jet injector could easily be used in the field but also that widespread use of the jet injector would require less manpower and cost significantly less than a campaign using conventional vaccination methods. 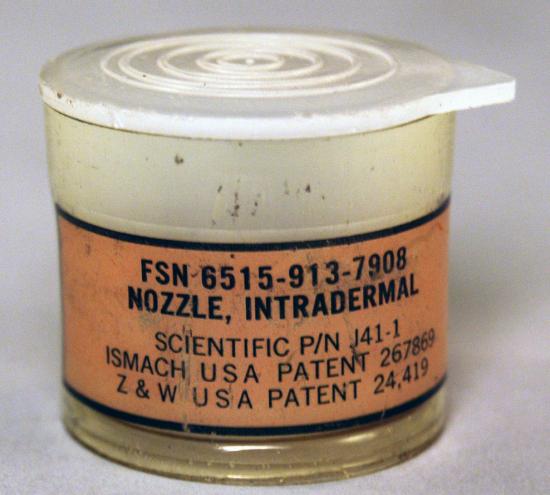 The "peace gun" played a crucial role in the early stages of the smallpox eradication program. Unfortunately, because wear and tear often damaged jet injectors, their use required WHO to maintain a staff that could care for these devices. As a result, jet injectors were used only in places like Brazil where the campaign was highly organized. In other areas, a bifurcated needle, which could be easily used and sterilized, delivered the vaccine.

As vaccinators crisscrossed the world using both the jet injector and the bifurcated needle, the WHO carefully tracked smallpox outbreaks and cases. In 1980, two years after the last case of smallpox had been documented, WHO officials proudly announced "Smallpox is Dead!" But smallpox was not truly dead. It was simply serving a life sentence, confined to a handful of government laboratories.

Alexandra M. Lord, Ph.D., is chair of the History of Medicine and Science Division. The peace gun is currently on display in the Artifact Walls on the museum’s first floor.