Arts Bind People to Place & Each Other 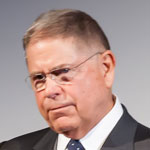 ALBERTO IBARGÜEN is president of the John S. and James L. Knight Foundation, which promotes democracy through the strengthening of informed and engaged communities. Knight invests in journalism, in the arts, and in the success of cities where the Knight brothers once published newspapers. Ibargüen is the former publisher of The Miami Herald and El Nuevo Herald. He served in the Peace Corps, practiced law, and joined the Hartford Courant, then Newsday, before moving to Miami. He has chaired the boards of PBS, the Newseum, and the World Wide Web Foundation; been vice chair of the Connecticut Commission on the Arts; and served on the boards of Lincoln Center and the Merce Cunningham Dance Company. He is a member of MIT’s Visiting Committee for the Media Lab and is a fellow of the American Academy of Arts and Sciences.