Virginia and Québec each developed economic and social systems organized around a single staple product.   By contrast, New Mexico produced a variety of goods for export to New Spain.

Europeans, Native Americans, and Africans were all familiar with some institutions of servitude and slavery.  Yet European movement into the Americas generated new forms of controlling labor, including indentures and chattel slavery.  The three colonies developed different types of bound labor and relied on them to varying degrees. 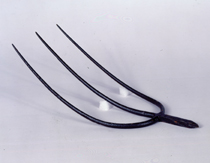 The English at Jamestown discovered a way to prosper that reshaped everyone's plans.  A tobacco boom in the 1620s allowed some to make fortunes, and soon the English were scrambling for land and looking for new ways to attract and exploit labor.  English planners called for the colony to diversify, and to produce potash, silk, or other commodities as well, but settlers ignored them.  The Powhatans became marginal to this new, staple-crop economy of English Virginia. 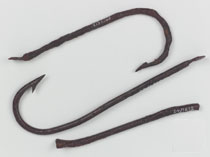 French Fur Companies established large agricultural estates called seigneuries, but the mainstay of the economy was the fur trade. The colonists’ indigenous allies hunted and trapped.  Men did the hunting, and women prepared the pelts so they could be sent as cargo to French ports.  For decades, the French were middlemen.  About 1650, the Iroquois largely destroyed the Huron nations, and Frenchmen themselves began traveling into the interior as traders and trappers.  These coureurs des bois developed a more nomadic life than the more settled colonists.

As early as 1570, North American furs appeared in European markets.  When large-brim hats of beaver felt became fashionable, the Canadian fur trade became highly profitable.  Hunters used the hooks to drag beavers from their lodges.  These are from Mingan, Québec, a trading post from 1661 to 1922.
National Museum of the American Indian, Smithsonian Institution (24/1612)

Pueblo peoples were irrigation farmers who specialized in maize, beans, squash, and cotton, as well as seasonal hunting and gathering.

The Spanish introduced new domestic animals.  New Mexico developed an economy that combined farming with ranching in sheep, goats, and cattle; trade in buffalo hides and deerskins; and commodities including salt and pine nuts.

‹ Thinking About Names up Labor Systems ›