Europeans believed in an orthodox theology, whether Catholic or Protestant.  English, French, and Spanish settlements each established a state church and prosecuted dissenters from what they considered "the one, true faith."

Indigenous peoples were more tolerant of new beliefs and ways of connecting with the divine.  Yet Powhatan, Algonkin, Huron, and Pueblo peoples all encountered newcomers who expected them to abandon their religious beliefs and embrace European ones. 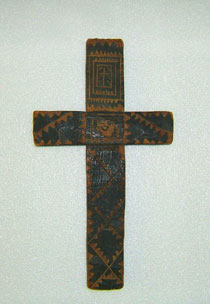 Jamestown
The Jamestown colonists did not share the intense sense of Christian mission that marked the Puritans in New England.  Still, many were sincere Anglican believers.  By 1668 there were sixty-two churches.  Dispersed settlement on tobacco plantations inhibited regular church attendance, and the colony had difficulty attracting English clergymen to remote New World parishes.

Québec
Commerce dominated Québec in the earliest years, but the city also felt the impact of the Counter-Reformation, a Catholic resurgence against the tide of Protestantism.  Within a few years, Recollet missionaries, Ursuline nuns, and Jesuit priests settled in New France, where they established churches, schools, and hospitals.  French authorities banned dissenting Protestants (Huguenots) from the colony, which further limited the number of immigrants into New France.  Québec became the first parish of New France in 1664 and the first bishopric of North America in 1674.

Santa Fe
The ranking Franciscan prelate who arrived in 1611 hoped to eliminate civil authority entirely, making New Mexico exclusively a missionary province.   After the Pueblo Revolt and re-conquest in 1692-93, returning priests were few, fearful, and more respectful of the civil and political authority needed to protect them.  Like New France, New Mexico became less a religious endeavor and more a political project in the late 1600s.