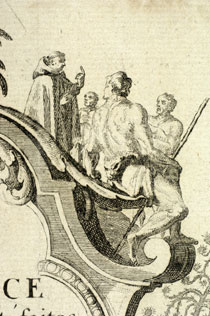 Jamestown
Englishmen imagined bringing the Powhatans to Christianity, but settlers made little effort to change Native peoples' beliefs and practices, and Pocahontas was virtually their only convert.  After a Powhatan attack killed one-fourth of the newcomers in 1622, the English in Virginia largely abandoned the idea of converting indigenous peoples or incorporating them into English colonial society.

Québec
Jesuit missionaries lived in Huron villages and learned new languages in which to teach and translate the Bible.  They set up schools, and pious French settlers became godparents to indigenous children.  Yet the project of transforming Native peoples into Frenchmen involved some contradictions: while the church encouraged converts to become sedentary farmers, the fur companies needed hunters who would spend long months away from church and mission.

‹ Spiritual Life up Thinking About Conversion ›