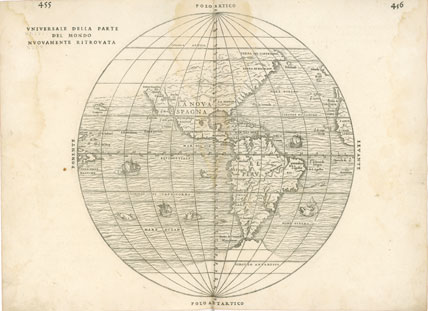 This 1556 map shows the fabled city of Cíbola, which Francisco Vázquez de Coronado sought in vain from 1540 to 1542.  He imagined a wealthy city like the Aztec capital Tenochtitlan, which the Spanish had conquered in Mexico.  Instead, he found modest agricultural villages of adobe and stone.  Reproduction. John Carter Brown Library at Brown University

Three settlements, established by England, France, and Spain in the early 1600s, will create a new world for both the settlers and the original inhabitants in the territory being colonized.  Their encounters and interactions will have consequences for centuries. 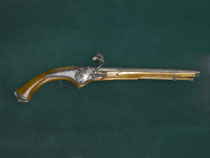 This wheel-lock pistol, manufactured in Germany, is a type that has been found in trash pits at Jamestown.  Although firearms gave Europeans an advantage in combat, this particular pistol mechanism was so complicated that it was hard to repair.  Smithsonian National Museum of American History, Kenneth E. Behring Center

For a century after Columbus, Europeans showed limited interest in the territory that today is Canada and the United States.  In the South, Spain had conquered a valuable empire in South America, Central America, Mexico, and the Caribbean.  Now, England and France were about to establish their first lasting settlements in North America, and settlers from New Spain would move upward into a "New Mexico." 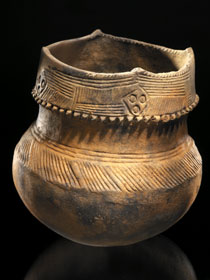 This pot from about 1550 was made by Laurentian Iroquois, an agricultural people who occupied the St. Lawrence River Valley at the time of Cartier’s expeditions in the 1530s.  When French explorers re-entered the St. Lawrence in 1603, the Laurentian Iroquois had dispersed, possibly as a result of wars with the Huron from north of Lake Ontario as well as losses from European diseases.
National Museum of the American Indian, Smithsonian Institution (6/8429)

Societies of indigenous peoples inhabited the North American continent for thousands of years.  In the 1500s, limited contacts with European explorers, traders, and fishermen introduced deadly germs and disrupted established alliances, rivalries, and ways of life.  Soon, however, European efforts to create permanent settlements would introduce more devastating disease and challenges on an earth-shaking scale.