In a memo released by the White House on January 21, President Obama charged government agencies to open up their virtual doors and make their inner workings more accessible to the American public. The President called for government to be transparent, participatory, and collaborative, saying “Openness will strengthen our democracy and promote efficiency and effectiveness in Government.” In this age of economic fraud and mismanagement, the expectation of greater transparency and openness from every institution is understandable. 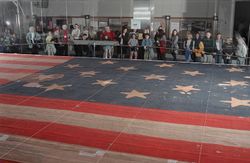 The Star-Spangled Banner undergoing treatment in the conservation lab, 1999.

We have always tried to make what we do here at the museum as public as possible. In 1998, when it was determined that the the Star-Spangled Banner—the flag that inspired the national anthem—would need to go through an extensive, years-long preservation process, the museum sought out money to build a new conservation lab that would allow the work to take place in full view of the public. We felt it was important—and worth the extra work and money—to keep a national treasure and its preservation on view for everyone to see.

But our new digital world offers new opportunities and new demands for institutional openness. Last week I was fortunate to attend a wonderful talk by Dr. Maxwell Anderson, Director of the Indianapolis Museum of Art. Dr. Anderson discussed the increasing public demand for institutional transparency, and why it has so far been difficult for museums to achieve. The IMA has taken a bold step towards total transparency. A dashboard on their Web site gives real-time statistics for their institution—everything from the number of visitors in the building, to the kilowatt hours used, to the current size of the museum’s endowment.

We haven’t become quite as transparent as the IMA yet, but this blog itself has been a big step for the museum in our quest to get there. Through our blog posts so far, we’ve tried to show you how we make decisions and get things done, as well as bring out into the light the research and collections that might have previously stayed behind closed doors. We’ve also been seeking more participation from you through online projects like our Star-Spangled Banner singing competition. We know we’ve got a long way to go be fully transparent, but we’re working on it.

What have you enjoyed learning about the museum that you didn’t know before? In what areas would you like the museum to be more transparent?