How many people does it take to clean a canton? 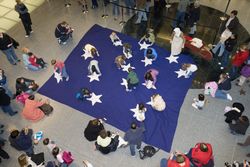 The voicemail message from the Daily Programs Coordinator sounded a little stressed: “How can we clean the canton?” Very carefully, I thought… this is a 16×18-foot piece of blue wool, made up of twelve 18-inch wide strips hand-stitched together. Four times a day, seven days a week, one of our talented actresses tells the story of Mary Pickersgill, the Baltimore seamstress who sewed the original Star-Spangled Banner (which is now safely ensconced in its own protective gallery). The performer invites children to help her place 15 stars on the re-created canton—one for each state in the Union in 1813—which she has spread out in the Museum’s Flag Hall. Evidently one of the youngsters, or a toddler sibling, had had a slight accident on one corner.

So, the canton needed to be cleaned—thankfully, we had an understudy canton waiting in the wings. Easy, my office mate and I thought (we’re long-time program producers, we know what to do!). There is a very-large capacity washing machine in the building; we’ll run it through that. Not so fast! A call to the Star-Spangled Banner’s conservator and the reproduction canton-maker confirmed that the wool would shrink—and of course, it needed to be kept at the original garrison-sized flag dimensions.

Okay, Plan B. We’d take it to a local drycleaners, well-regarded for its care of important objects owned by the diplomatic and government corps. That simple decision then required multiple interactions with our accounting staff: Is the cleaners in the federal payment system? Who writes the purchase order? Which fund? Who calls in the okay to use a particular government-issued charge card? Finally, all the proper paperwork was processed, and I volunteered to schlep the canton to and from the cleaners. Success! As per our instructions, the canton was cleaned and beautifully folded, ready to go back onstage.

But the process took quite a while and involved lots of people… It reminded me of a label in the exhibition, The Price of Freedom: Americans at War. In the section “So Others Might Fight,” there’s a quote: “For each infantryman in combat, ten other men—and women—in uniform provided support or supply services…” The text went on to include specific verbs—procured, transported, maintained the material and technologies—to wage war. It seemed appropriate that, while we weren’t waging war, there were at least ten—or more!—people working hard behind the scenes so the show, and the telling of the history, could go on.