Of Nobel Prizes and erector sets

In accepting his appointment as Secretary of Energy, Steven Chu became the first Nobel science laureate to serve in a cabinet position. His selection was also a first for a Chinese American scientist, the type of societal breakthrough we celebrate each May with Asian Pacific American Heritage Month. Chu, one of the scientists featured in the Lemelson Center’s Nobel Prize centenary celebration, received the prize for an amazing piece of experimental manipulation that used laser light to cool or slow down the motions of atoms almost to a standstill. His Nobel citation linked this fundamental discovery to a range of applications, from more precise atomic clocks to atomic lasers and to nanotechnology. 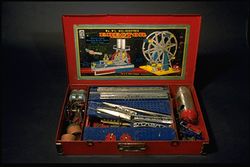 Although Chu came from an academic family, he has a talent and an inclination for bridging pure and applied research, a talent that will be critical to his success as Secretary of Energy. In his Nobel acceptance remarks, he pointed out that these twin interests were ingrained since childhood. “Education in my family was not merely emphasized, it was our raison d’être,” recalled Chu, echoing the family experiences of many high-achieving Asian Americans. At the same time, he noted, “by the fourth grade, I graduated to an erector set and spent many happy hours constructing devices of unknown purpose where the main design criterion was to maximize the number of moving parts and overall size. The living room rug was frequently littered with hundreds of metal ‘girders’ and tiny nuts and bolts surrounding half-finished structures.” I find it interesting that the latter quotation could have come from almost any inventor. Yet, in fact, this childhood fascination with mechanical toys and devices turns out to be typical of scientists as well, including those at the Nobel level.

Over the years, the Lemelson Center’s programs have presented and documented a number of Asian-Americans who, like Chu, bring basic scientific knowledge to the service of technology and humanity. Among those featured have been such Indian Americans as Akhil Madhani, an MIT student who invented a robot for heart surgery; Subhenda Guha, a participant in the Center’s Solar Shingle Challenge; and Ashok Gadgil, who developed his UV Waterworks purifier for use in his native India. Still other Asian Pacific American inventors are featured in the Museum’s exhibition, Science in American Life, Indian immigrant Vijaya Melnick, an expert in urban public health; Chinese immigrant physicist S.B. Woo, who also served as Lieutenant Governor of Delaware; and the Shanghai-born nuclear physicist Chien-Sung Wu, who worked on the Manhattan Project and helped revise some of the fundamental laws of physics. These individuals make it clear that American science and technology have benefited immensely from the contributions of Asian Pacific Americans.

Art Molella is Jerome and Dorothy Lemelson Director of the Lemelson Center for the Study of Invention and Innovation, National Museum of American History.