On a typical day here at the museum, it would be hard to describe our “average” visitor. The people flowing through our doors are from all over the world, of every age, shape, and creed. The only true constant is their diversity. 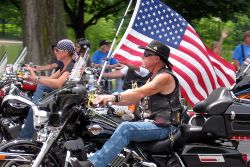 But there are times when a special event taking place on or around the National Mall changes the demographics of who’s in the building pretty dramatically. I love these weeks—when you look around and realize that you’re the only person within sight who isn’t a Boy Scout, or a marcher in a protest for one cause or another. The annual parade of school crossing guards fills our hallways with elementary school kids in fluorescent sashes, all moving in a very orderly fashion. A conference on the 100th anniversary of the Teddy Bear five years ago brought streams of adult teddy bear fanatics through our doors to see the bears in our collection.

And so it is every Memorial Day weekend, when you can’t help but notice a huge increase in the number of leather vests and bandannas strolling through the building. Memorial Day in D.C. is not just about hot dogs and beach vacations and an extra day off. Memorial Day is about Rolling Thunder, the annual motorcycle rally that honors men and women lost and missing in combat. Many of the people who travel from across the country to ride in Rolling Thunder are veterans themselves. Every year I find them to be some of the nicest, most enthusiastic visitors I’ve ever met. It’s an honor when they make a trip to the National Museum of American History an important part of their visit to D.C.

I snuck out of my official duties last Sunday to take a peek out at the cavalcade of motorcycles roaring down Constitution Avenue. Four hours later, they were still streaming down the street, American and POW-MIA flags flapping in the breeze behind them. They don’t call it Rolling Thunder for nothing, people—it was loud, powerful, impressive, and very moving.

When you live in Washington, D.C., it’s easy to get jaded. (Ugh, does the President really need to take his motorcade during rush hour? Can’t he just take the helicopter? I have places to be!) But these gatherings of people with common ideas and interests remind me of what I love so much about this city. It really is a place for people with all kinds of ideas to join together and make themselves heard.

And when you’re part of a procession of thousands of Harleys, one thing you can count on is that you’ll be heard. I look forward to seeing the museum fill up with leather vests and motorcycle boots again next year, and thank the men and women wearing them for reminding me what Memorial Day is really about.