What the American flag means to you

A child. A truck. A quilt. A gravestone. These are all answers to the questions posed by the Share Your Story project: “What does the American flag stand for? Is it a sacred symbol? Has it meant something important to you? Does it represent you? Have you ever used the flag to make a statement?” Lots of things to think about. Many places your mind could go.

The product of the Star-Spangled Banner “Share Your Story” project is a mosaic of the American flag made up of stories and photos from people like you. Perusing the images and the words that have been submitted, I’m struck by how the flag is used to express different ideas about what it means to be American. It is a sign of freedom. A reference to the federal government. The emblem of a superpower. An icon of loyalty. A symbol of pride as well as a symbol of protest. 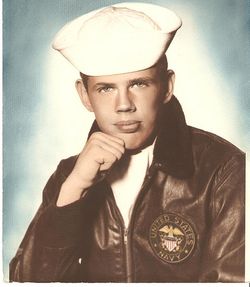 One of my favorite submissions is a photo of Don Faulkner, a Navy man who wrote an essay in the eighth grade about what the colors of the flag brought to mind for him. Blue stands for “the waters around the United States that hold it together like a vice holds two pieces of wood together”; white, “the clouds that fly over the United States, so easily without a bump or rough place like the peace of peace time”; and red, “the fire that consumes intruders that try to turn the handle that holds the United States together.”

Another veteran, mercenary2372 is pictured during a 15 month tour in Iraq:”I am holding a flag my dad sent me in the mail. The American Flag stands for freedom and is the symbol of our country that I salute in the morning for reveille and in the evening for taps.” Alongside his photo of flag flying outside the Department of Justice headquarters M.V. Jantzen writes: “I don’t feel the American flag is a sacred symbol, but it does feel like home.” JeanieBeach thinks her photo of a truck stop illustrates how “the American flag captures the rugged determination of Americans to create sanctuary anywhere they find themselves.” And Gelane explains that the young boy pictured in her photo was “born on the army’s birthday, Flag Day!”

With 15 rows of 24 image tiles, we need more than 360 photographs to complete the American flag mosaic. This is your chance to contribute your point of view. In commemoration of Flag Day this year, I hope you’ll share your thoughts and images of what the flag means to you. Spread the word and help us fill up the mosaic!

Dana Allen-Greil is the new media project manager at the National Museum of American History. She likes to think of the flag as a connector.