Coming into work one Monday morning in November 1996, I strolled by a small exhibit case and noticed that something wasn’t quite right. The case was very familiar to me because it was part of the Lemelson Center’s newly-opened exhibition, From Frying Pan to Flying V: The Rise of the Electric Guitar and I was the co-curator of the show. On closer inspection I discovered that indeed something had been added, or I should say some things—specifically, 7 guitar picks littered the floor of the case. With eyes only half open before my customary morning cup of coffee, I scratched my head and wondered: How did those get there? 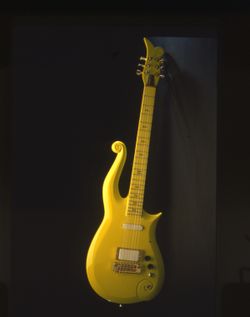 Eventually, I realized that museum visitors had slipped them through the miniscule cracks between the case’s glass doors, apparently leaving them as offerings to honor iconic instruments (including a loaned first edition 1954 Fender Stratocaster) and beloved musicians such as Prince, represented by his 1989 “Yellow Cloud” guitar from the music collections. It turns out that this wasn’t an isolated incident; we found more guitar pick offerings throughout the show’s run. I also stumbled upon a man literally on his knees in front of a case featuring early instruments including the 1931 prototype of the Rickenbacker “Frying Pan,” the first commercially successful electric guitar. Reverently, the man turned to me and proclaimed: “This, to me, is the Holy Grail of electric guitars.”

This aspect of museum exhibits as pilgrimage sites can be amusing but it is also inspirational. The power of the object, the “real thing,” is reflected in the awed reactions of visitors—from the young visitor who runs excitedly to a case saying “look, Mom, look!” to these anonymous donors of guitar picks who felt compelled to leave behind an extension of themselves (or at least their guitar-playing fingers). Although the Lemelson Center’s electric guitar exhibition closed in 1997, its complementary Web site lives on, and I continue to receive e-mails that attest to the personal meaning and educational impact of the research we share with the public. The powerful personal connections made between individuals of all ages and the millions of artifacts we collect, research, and display are why I love to work at the National Museum of American History, and are reminders why museums play an important role in our society.

Currently a few notable instruments from the museum’s guitar collection are displayed in the artifact wall on the second floor near the Welcome Center. Please come and visit, but don’t leave your guitar picks behind!

Monica Smith is Exhibition Program Manager for the Lemelson Center for the Study of Invention and Innovation at the National Museum of American History.

Posted in From the Collections, Invention & Innovation, Musings