Ellington in Ethiopia, Armstrong in Kenya

I recently had the pleasure of traveling to Ethiopia—a trip sponsored by the State Department—to lecture on American jazz and culture. After receiving our Jazz Appreciation Month (JAM) posters for many years, the U.S. Embassy in Ethiopia decided this year to celebrate JAM (now celebrated in 40 countries) for the first time. 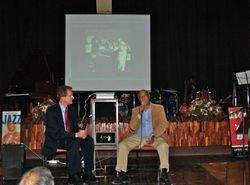 Ellington is of particular interest in Ethiopia because he performed there, in 1973—a visit recalled warmly by Mulatu Astatke, “the father of Ethiojazz” —a pianist-composer who was Ellington’s guide during that historic visit. I had the honor of interviewing Mulatu before an audience of 350 on Ellington’s 110th birthday anniversary. That and a longer interview with Mulatu will be added to the Jazz Oral History Collection, in the museum’s Archives Center. I’m now helping Mulatu to arrange a concert in Washington, D.C. The museum has objects from the 1973 tour in the Duke Ellington Collection, and my slides included the striking medal that Emperor Haile Selassie presented Ellington, as well as program booklets and photos documenting his performances.

Based on the National Museum of American History’s example, the National Museum of Ethiopia (famous for housing the 3.2-million-year-old “Lucy” skeleton) is now interested in establishing its own music program. There is a strong bond between Ethiopians and the United States—in fact, there are more than a million Ethiopians living in the US, with an estimated 250,000 of them in the Washington area. The fact that Ethiopia has a homegrown jazz tradition also creates a basis for communication, friendship, and relationship-building. 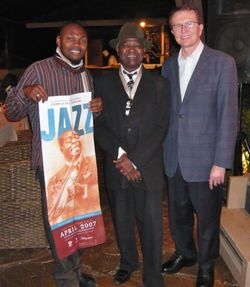 Barack Obama’s election has electrified East Africa, heightening interest in American history and culture. Louis Armstrong performed several times in Kenya, so he was the focus of my talks there. One of the museum’s musical treasures is a battered cornet he is believed to have been taught on, and that figured in my lectures in Nairobi. JAM posters of Armstrong (and of Benny Goodman) were received eagerly by the Kenyans. The JAM posters are so appreciated by the US Embassies that they have framed them for permanent use.

After my visit, U.S. Embassy officials from Addis Ababa and Nairobi came to Washington and I introduced them to museum director Brent D. Glass; they met with Daniel Sheehy, acting Director of the Smithsonian Folklife program, about Folkways Recordings of their countries’ music and the potential to be featured at the Smithsonian Folklife Festival with Joann Stevens, Program Manager, Jazz Appreciation Month Initiatives, about expanding their participation in Jazz Appreciation Month; and with Ken Kimery, Executive Producer of the Smithsonian Jazz Masterworks Orchestra (SJMO), to explore the potential of bringing the SJMO to their countries to perform Ellington music, from the museum’s Archives Center, and other American jazz.

A trip such as this benefits audiences in Africa and showcases the work of the Museum.  It reminds us of the power of American musical innovators such as Armstrong and Ellington to transcend time, language, and culture.

John Edward Hasse is a curator in the Division of Music, Sports and Entertainment at the National Museum of American History.