While Saturday mornings typically find me sleeping in or going for a run, the morning of August 1st was different. I arrived at the museum at 5:45 a.m. to greet LEGO Master Builder Steve Gerling and the rest of his team. Dressed in jeans and fortified with coffee, we quickly got to work unloading Steve’s truck filled with supplies to build the world’s largest light bulb made out of LEGO bricks.

To kick off National Inventors’ Month, which is celebrated each August, the Lemelson Center collaborated with LEGO Systems, Inc. to build the supersized light bulb, the universal symbol of a big idea. We had planned the “build” to span two days, and while I had every confidence Master Builder Steve would make it all happen, I was a little intimidated by the many boxes of bricks that we unloaded that morning. How would all of this stuff morph into one giant light bulb by Sunday afternoon? 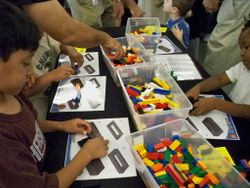 In all, about 40 boxes—each holding some 7,500 bricks of a single color—came off the truck and into the museum, along with steel supports (to stabilize the structure) and one giant tarp. The tarp was spread out on the museum’s first floor and, one by one, the boxes were emptied out. The sound of brick-against-brick in the empty museum was cacophonous, and as someone who has fond memories of playing with LEGO toys as a kid, the sight was magical! 300,000 LEGO bricks in all colors of the rainbow were mixed together on the tarp and then parceled out into buckets for visitors to use in creating their own small pieces of the giant bulb. 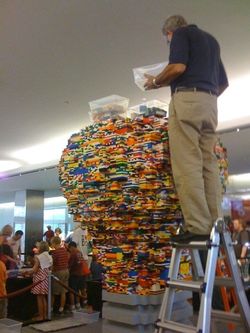 When the museum opened at 10 a.m., Steve began building the light bulb’s gray base and at 11, visitors were invited to begin creating their own blocks to add to the structure. “I loved how everyone could get to work on the big light bulb,” one visitor commented. At around 3:30 Sunday, Steve put the last visitor-built block—patterned to look like the American flag—into place. Upon completion, the light bulb was 8 feet high, 6 feet wide, and weighed approximately 400 pounds.

At 7:15 Sunday evening, we began to disassemble the light bulb, first removing the cap of bricks at the top and then pulling the light bulb apart in large “chunks.” The chunks were then broken into smaller blocks which we packed into boxes for their trip back to LEGO. What took us two days to build took us about 45 minutes to take down.

Like many great inventions, the light bulb was a true collaborative effort, the product of more than 10,000 museum visitors—and one Master Builder.

Editor’s note: Check out more photos from the event and this cool time-lapse video of the light bulb being built! Or download instructions to build your own LEGO lightbulb at home (.pdf).

Tricia Edwards is an Education Specialist for the Lemelson Center for the Study of Invention and Innovation at the National Museum of American History.