Several weeks ago a brown box full of photographs arrived at “The Smithsonian.” Being that “The Smithsonian” is actually made up of many museums and research centers, this brown box was circulated through several offices before I finally got the call to see if it was something I wanted. Usually the Smithsonian would rather not receive unsolicited donations, though sometimes it works out well—after all, James Smithson’s donation was an unsolicited gift!

I got a whiff of the box. Hmmm. Slightly moldy smell. I opened the box to find that the photographs were just dumped in and sliding around over each other. There was broken glass in the bottom. This wasn’t going too well. But then, I started pulling out the snapshots. And there it was. A snapshot of a woman at a funeral. Okay, so that’s not a Hope Diamond or a pair of Ruby Slippers, but for me it was a gem. You see, we humans don’t tend to take snapshots during moments of crisis, unless you are a photojournalist, perhaps. But then it usually isn’t your crisis.

As a photo curator interested in vernacular photography (the personal use of photography), I’m on the look-out for those photographs that fall outside of the typical snapshot. Since the introduction and wide spread use of inexpensive photography in 1900 by Kodak’s Brownie, snapshots have fallen into fairly typical categories: celebrations (birthdays, anniversaries, graduations, etc.), religious milestones (confirmations, bar mitvahs and bat mitzvahs), holidays, travel, and general good times. Good times are the key. As we use photography to document our lives, we tend only to capture the happy and positive aspects. Understandably, in the midst of our own crisis, rarely do we pick up a camera and think to document domestic violence, a tragic accident, a dying person, or the like. Nor do we tend to photograph dirty dishes stacked in the sink, crying children, and other such images that may have a negative connotation to future viewers. 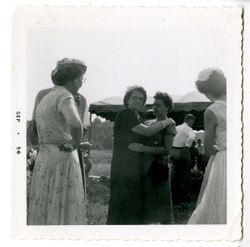 So when I saw this slightly faded photograph printed in September 1956 of a woman with a tissue or wadded up handkerchief in her hand, the expressions of the woman being comforted and the one comforting, and the funeral canopy, it made me happy. “Ahh,” I sighed. Someone in rural South Carolina captured the challenges we face in life. I can’t know the intention of the photographer, and whether or not he or she felt this was crisis. Perhaps someone said, “Bring your camera and photograph the funeral,” and then the photographer deviated from the decorum of picturing the coffin and the flowers, but not the grieving. There are other photographs of this funeral. But not of the tears.

When putting your scrapbooks and albums together—as you construct these histories of your life—think about all of its ups and downs, and how you can share a fuller life story. (And if you want to send in an unsolicited donation, the Photographic History Collection is always happy to receive a spontaneous check.)