Today’s post is the fifth in a series of weekly Julia Child recipes. This week, deputy registrar Tom Bower shares his experience with making Julia’s turkey orloff, and some personal notes on making stock.

“The turkey variant is much less expensive, less rich—and less work. But it is a recipe designed for the food processor.” 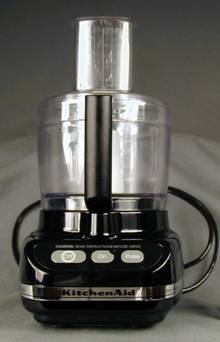 Buffet for 19 may sound frightening, but it was Julia’s menu created for the television series Julia Child & Company. This meal for a crowd includes Turkey Orloff, this week’s recipe. Based on the traditional Veal Prince Orloff (named for a 19th-century Russian gourmet by a French chef), Julia substituted turkey for the veal. She also used a food processor instead of a knife, freeing herself (and her students) from the tedium of chopping 15 cups of onions and mincing several quarts of mushrooms by hand. Julia introduced the Robot Coupe, the French predecessor to the now-familiar food processor, to her viewers on The French Chef. She was using the food processor pictured here just before she gave her kitchen to the Smithsonian in 2001; it sat on the butcher block near her shears, cleavers, and other sharp tools.

Where to Find the Master Recipe: Veal or Turkey Orloff

I have prepared this recipe many times over the last 30 years. As a very savory, almost one-dish meal, it has the useful characteristics of being filling yet relatively light. With a vegetable or salad it is great dinner-party fare, leaving one free to enjoy guests with a minimum of kitchen duty. It may be done a few days ahead and is delicious the second night, though that rarely happens. As Julia notes, thin slices of chicken, pork, or veal work as well. For those sensitive to flour, the meat may be browned without it and the sauce can be reduced a bit more while increasing the amount of rice.

While I concur with Julia’s sentiment that there is nothing like butter for browning, taste, and feel or, my cardiologist would also add, for lining my arteries. Thus I use olive oil or a mix of olive oil and butter in the instances where butter is called for. Exceptions include any situation for which one wants quick browning: olive oil will not work, but for general thickening it is fine. In addition, I used a full-bodied broth to make the veloute and skipped the egg. I tend to use dense broths in place of eggs or egg yolks where richness rather than adhesion is the desired result. I also use little or no salt, finding it to act more as a cover-up of flavors, unless it is part of the taste palate I am trying to achieve. I prefer ground black Malabar pepper or grain mustard for their enhancing character. 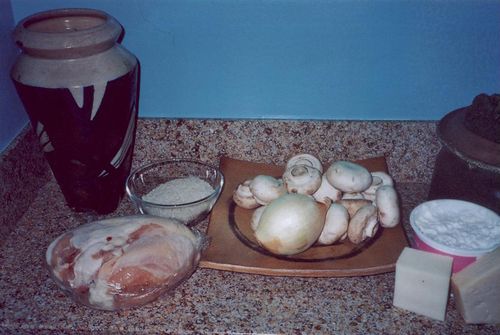 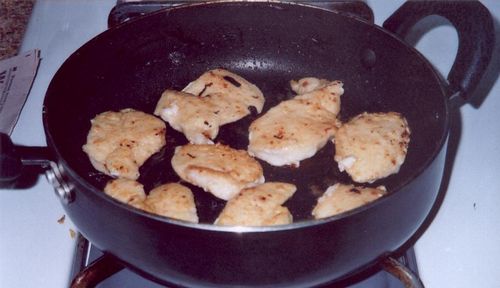 Browning the fillets in olive oil (and a little butter). 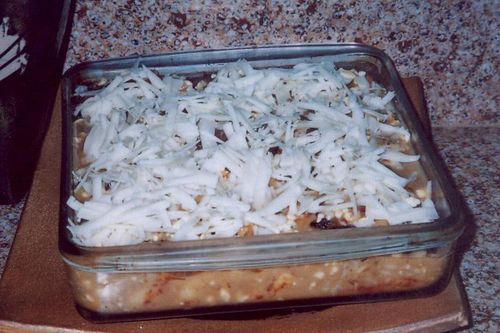 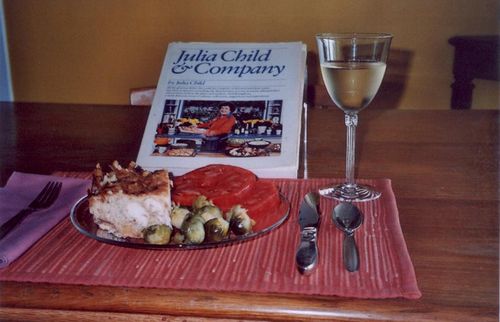 For broth or stock, I collect the drippings from roasted meats that are not served immediately and /or liquid from the cooking pans, which I have de-glazed with appropriate wine or dry vermouth. These are reduced and strained as needed. The result is chilled and the fat is removed from the top. If there are a lot of bones or leftover bits of meat (particularly poultry), I will boil these with some aromatic vegetables and follow the same procedure. The result is a flavorful, firm gelatinous stock that can be frozen until it is needed. Fish stock and reduced poaching liquid can be treated in the same way.

(1) The simmering stock pot: browned bones and meat, onions, carrots, celery, pepper, herbs, wine, and water. (2) After straining out the soft vegetables, bone, and meat, the liquid is chilled. The hardened fat and sediment is shown partially skimmed away. (3) The chilled stock is flipped over to show the layer of sediment. I prefer to clarify stock in this way, as opposed to Julia’s egg-white-boil method. The sediment can be separated with a spoon and used in a thick sauce or discarded.

We invite you to join with us in this celebration of Julia Child’s life, work, and contributions to American culinary history. Please share your experiences making Julia Child’s recipes by posting your story, photos, or video on our Tumblr page for this recipe series. Don’t forget to check back next week for sautéed mushrooms in butter.

Tom Bower is the deputy registrar at the National Museum of American History.