America is a big place. Kind of a silly thing to say, but think about it: we cover 3,000-odd miles coast to coast, span several time zones, and have quirky regional cultures and accents (apparently including my own fast-paced Northern California patois, who knew?). We also have a National Museum of American History. But if it’s national, how do you access the all the exhibitions and expertise and nifty objects that reside in Washington D.C.—when you don’t? 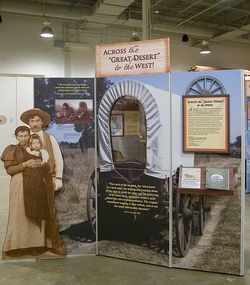 That’s where the Smithsonian Institution Traveling Exhibition Service, (SITES), comes in. It uses the resources and knowledge from Smithsonian museums and their experts to create exhibitions for local communities across the country. One of their newest exhibitions is called Journey Stories, from the National Museum of American History and SITES, in partnership with the nationwide program Museum on Main Street. Journey Stories spotlights many different stories of people who have traveled to look for opportunity and security: immigrants from Europe and Asia, pioneers traveling West, travelers on the Underground Railroad, dust-bowl migrants, and even modern vacationers. It was based in part on our permanent exhibition about transportation, America On the Move.

But planning a traveling exhibition to fit in a small local venue is different from one which occupies an entire wing of our building on the National Mall! “With a conventional exhibition, you want the objects themselves to draw you in and introduce the story,” curator William Withuhn notes. “They intrigue the visitor with something that’s intrinsically interesting.” America on the Move spins stories around stationary objects, like a green railway engine from Southern Railways which traversed North Carolina. Journey Stories, in part because it will be on exhibit in multiple locations simultaneously, tells a story in seven standing sections that can be displayed in a museum or town’s historical society. “It’s a different experience from going to the Smithsonian,” Withuhn says. Instead, the traveling exhibition comes alive through sounds, pictures, and object replicas.

Our traveling exhibitions are much more than a book on a wall. Local museums hosting the exhibition make them relevant to their communities by organizing events that encourage visitors to take ownership in their local history. “You want to have a synergistic impact on the town,” Withuhn says. “It hooks into the town’s awareness of itself.”

The Journey Stories exhibition is currently touring in Illinois, Kansas, Mississippi, North Dakota, and Oklahoma. In 2010, the exhibition will move to Idaho, Minnesota, Missouri, Tennessee, and Washington. You can find a detailed list of dates and locations on the Museum on Main Street Web site.