The life cycle of a place of invention

My ears perked up at the announcement of this year’s Nobel Prize in physics. Not only was it awarded to an invention that revolutionized photography—the CCD (charge-coupled device) sensor at the heart of digital camera imaging—but it resulted from work undertaken at a historic industrial lab. Two of the three winners, Willard S. Boyle and George E. Smith, had done their pioneering research in the 1960s at AT&T's Bell Labs in Murray Hill, New Jersey—birthplace of the transistor. Theirs was just the latest in a string of Nobel Prizes coming out of that lab.

But at about the same time that Boyle and Smith were working at Murray Hill, Bell Labs opened a magnificent new facility designed in 1962 by Finnish architect Eero Saarinen at rural Holmdel, New Jersey. A veritable cathedral of technology, the quarter-mile-long glass-and-steel structure was noted for its soaring atrium, large open spaces for social interaction, and the way it blended in with its park-like setting. (Though clearly a product of 1950s and '60s "engineer culture," the historical footage of the construction of the lab on YouTube is worth watching.) It was a place designed for innovation.

Visionaries believed then, as many still do now, that it is possible to engineer creative environments that will generate, if not guarantee, Nobel-level innovation. Gorgeous, expansive environments, designers believed, had the power to unleash the creative energies of the scientists and engineers working within. 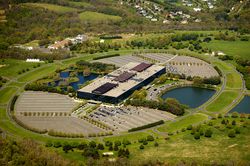 Image of the Bell Labs building in Holmdel by Leland Beaumont.

Can you engineer innovation? It is not clear. With Bell Labs we may never know, for Holmdel has seen its last days as a laboratory. After a lengthy antitrust lawsuit culminating in the 1982 breakup of AT&T, Bell Labs entered an era of decline. Alcatel-Lucent, the latest owner, abandoned the Holmdel property a couple of years ago. Today, weeds have overgrown the leaking atrium of Saarinen’s brilliant building, which once housed more than 6,000 scientists and engineers.

While one plan calls for razing the building, veterans of the lab, joined by other locals, have rallied to try to save it. Though the structure has so far escaped demolition, rescue plans do not include preserving it as a laboratory. As the Lemelson Center explores the theme of places of invention, we can only hope that the luster of two more Nobel Prizes for Bell Laboratories will support the cause of preserving this once-mighty laboratory that melded talented people and an inspiring environment into a major icon of not only American, but also world, innovation.