The best thing since sliced bread

Bread-making technology spawned many inventions and patents, like the bread-slicer. While the earliest bread-cutting devices using parallel blades appeared in America in the 1860s, they sat on the shelf for decades, awaiting the introduction of other machines capable of producing loaves of uniform shape, size, and consistency. 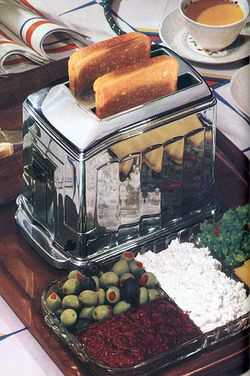 A page from a 1937 cookbook in the Frances S. Baker Product Cookbooks Collection, Archives Center, National Museum of American History.

The first effective bread-slicing machine was invented by Iowa-born Otto Frederick Rohwedder and put into service in 1928 by the Chillicothe (Missouri) Baking Company (the local paper ran a front page story on it!). By the 1930s, pre-sliced bread was fully commercialized, and standardization was reinforced by other inventions that required uniform slices, such as toasters. The common phrase, “the best thing since sliced bread,” as a way of hyping a new product or invention may have come into use based on an advertising slogan for Wonder Bread, the first commercial manufacturer of pre-wrapped, pre-sliced bread. With such products rapidly penetrating the American home, automated bread-making was not only an invention benchmark, but also a key indicator of the mechanization of daily life from the 1930s onward.

Machine-made bread eventually became almost wholly artificial, bearing little resemblance to the look, feel, and taste of the hand-made variety—so much so that manufacturers felt compelled to inject it with artificial vitamins to restore food value. And the soft, sponge-like, and very white “bread” found some unexpected applications. For instance, while bread had been used since the 17th century to clean the frescoes on the ceiling of the Sistine Chapel, Wonder Bread proved to be an especially effective sponge in the most recent restoration of Michelangelo’s masterpiece.

With things going so far, it is no surprise that the back-to-nature whole foods movement of recent decades chose to celebrate bread made in the way of earlier generations. People reverted to making their own bread at home, initially kneading and baking by hand, producing loaves of hearty consistency. By the late 1970s, however, bread-making machines began to appear in American homes, and all you had to do was toss in the ingredients and, within a few hours, out would pop a perfect loaf, barely touched by human hands.

Though I confess I never tried bread from one of those home machines, I’m sure it tasted good. It also helped ease the craving for something “homemade” for people with increasingly busy lives. Even as we seek a new balance in our food-ways, mechanized food, I am sure, will always be with us.

Art Molella is Jerome and Dorothy Lemelson Director of the National Museum of American History’sLemelson Center.