Women in music have always struggled with recognition for their talent but during the mid-1900’s jazz music was a hardly receptive place for a female instrumentalist to make her mark. Singing and playing the piano seemed to be the only socially acceptable roles for female musicians, and everything else was left for men. Yet, this didn’t keep women from branching out toward other instruments; the story of unrecognized female instrumentalists is full of gaps and undocumented characters. 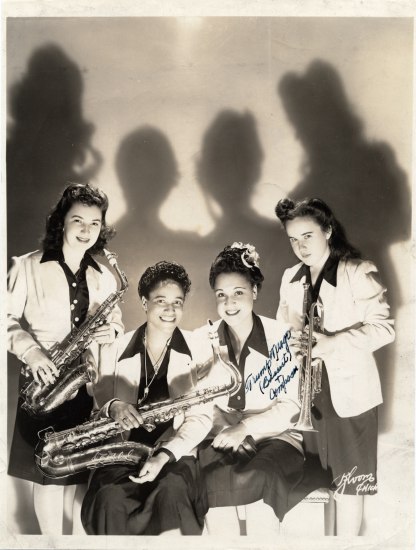 It wasn’t until World War II that women began to get noticed for music-making and it seemed revolutionary. With so many men overseas at war, American women stepped out of their domestic roles to fill vacant positions. The federal government reclassified jobs allowing blacks and women to enter the federal workforce. Many are familiar with Rosie the Riveter. But what about the “International Sweethearts of Rhythm,” an all-girl big band that spanned multiple races? Music could be just important as factory metal, helping raise morale and offering peace of mind during time of war. The Sweethearts did just so, without letting issues of race or gender impede them. Performing jazz was their passion and means of survival. And through music they helped change America’s social landscape and heal a fractured nation. 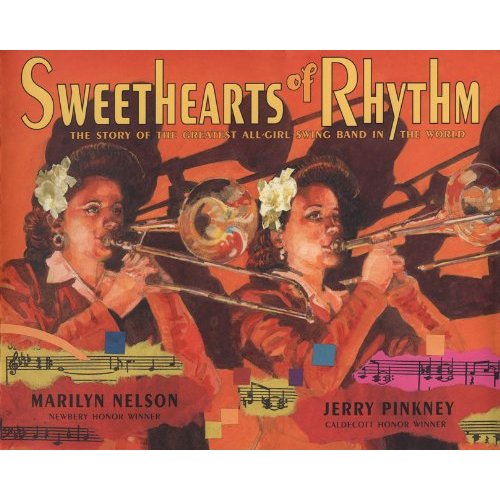 Author Marilyn Nelson and illustrator Jerry Pinkey bring the band’s hidden history to the surface with their vivid collaboration, Sweethearts of Rhythm. Told through poetry with accompanying watercolors and collage art, each story in the book gives insight on who the Sweethearts were and what they did. The short poetic stories are named after songs performed by the Sweethearts and each one highlights a band member that stood out on that particular song. Many of the poems are told through the perspectives of the instruments, creating an unusual and powerful vantage point regarding the Sweethearts.

The Sweethearts knew no color. Unique as stellar musicians, they made up the world’s first integrated all-female big band, comprised primarily of African American and mixed-race women in their teens and early 20s. Other band members were Chinese American, Mexican American, Native American, Hawaiian, and white women. They confronted Jim Crow laws in the South while on tour by painting their faces—it was illegal there for integrated bands to play together. One of Nelson’s poems mentions how Roz Cron, the band’s Jewish saxophonist, narrowly escaped the possibility of arrest for sweating off some dark makeup during a performance. Playing on many second-hand instruments, the Sweethearts kept touring and even became the first racially integrated group of women to tour with the USO overseas. 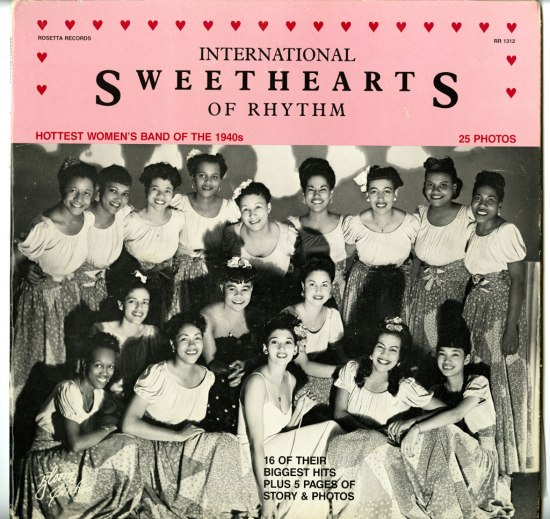 There were other women musicians and groups doing just what the Sweethearts did during the big-band era, yet there is still little documented history of their stories. We are fortunate that Nelson and Pinkey recreated the chronicled stories of the Sweethearts. Carline Ray, one of the last living members of the band, also keeps the spirit of the Sweethearts alive by still performing—even in her mid 80s. On Friday, April 23, at noon Ray will speak in a discussion about the International Sweethearts of Rhythm at the museum as part of the Smithsonian’s Jazz Appreciation Month, which takes place every year in April. The event will be followed by a book signing.

Joann Stevens is the program manager for Jazz Appreciation Month and Marian McLaughlin is an intern at the National Museum of American History. 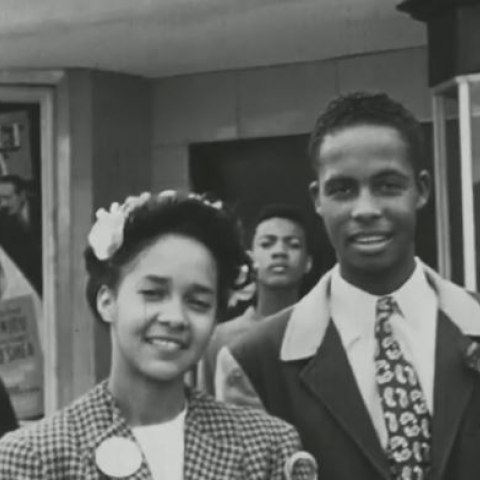