Are we on a slippery slope of national amnesia?

Is American history dead? Are we on a slippery slope of national amnesia? If you look at data from a recent Marist Poll, you might answer “yes” to these questions. Just before the July 4th holiday weekend, Americans were asked “from which country did the United States win its independence?” Only 74% of those polled identified Great Britain, 20% were not sure, and 6% named other countries such as Mexico, Spain, China, Japan, and France. Equally alarming are the headlines about significant budget cuts for museums and historical organizations across the country.

Responses to a recent Maris Poll which asked "from which country did the United States win its independence?"

As director of the National Museum of American History, I need to pay attention to this news. What can the museum do to contribute to an improvement in our historical literacy? Certainly our major exhibitions such as The Price of Freedom: Americans at War offer visitors an opportunity to learn about the major events that have shaped our national experience including a large section devoted to the American Revolution. Our award-winning website, History Explorer, provides teachers and students with innovative content that uses the museum’s collections to build a history curriculum. And we are playing an active role in working with the U.S. Citizenship and Immigration Service to give people planning to take their citizenship test—and people preparing applicants for these tests—an introduction to American history through the museum’s national collections.

In my travels around the country, there are many signs of a renewed commitment to preserving and presenting American history. In New Mexico, an impressive state history museum opened last year that reminds visitors of that state’s complex and rich heritage. In neighboring Colorado, the state historical society is building a stunning new headquarters funded through a dynamic public-private partnership. The East Tennessee History Center in Knoxville offers a timeline of regional history and maintains one of the leading genealogical libraries in the country. I have visited historic house museums as diverse as Taliesin in Green Hill, Wisconsin, and The House of Seven Gables in Salem, Massachusetts, and I was inspired by the knowledge, energy, and creativity of staff and volunteers. 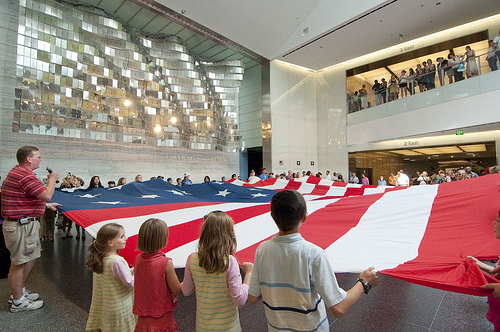 Students and museum visitors unfold a student-made replica of the Star-Spangled Banner in the museum's Flag Hall, September 6, 2009.

So rather than being discouraged by the July 4th poll or by any announcements of declining appropriations, I continue to be optimistic that Americans are eager to learn about our past. Our job is to connect our audience with the extraordinary collections and stories of the past, to make history come alive for young people and for new Americans. I do not subscribe to the belief that there was a “golden age” of historical knowledge. However, I do believe we are in jeopardy of losing our collective memory if we fail to invest significant financial and human resources in research, preservation, exhibitions, facilities, technology, and programs and thereby fulfill our mission to tell the story of America.