The Boy Scouts of America is celebrating its 100th Anniversary this year and the museum is joining the celebration by recognizing staff members that were scouts. To be honest, I don’t have a personal scouting story. But working in a history museum, I knew that some of the other staffers would have some of their own stories and memories tucked away, just waiting to be shared. I was thrilled to learn of their enduring enthusiasm about the program. I hope you’ll share your own scouting memories with us in the comments.

Howard Morrison, Director of Education and Interpretation, was in the scouting program from 1966-1973, earning an Eagle Scout distinction. Matt MacArthur, Director of New Media, participated in Cub and Boy Scouts from 1976-1986 and has also done service as an adult leader. Like Morrison, MacArthur is also an Eagle Scout. Douglas E. Evelyn, former Deputy Director of the museum, was in Cub Scouts, Boy Scouts, and finally transferred to Explorer Scouts during High School. Richard Strauss, museum photographer, was in the Boy Scout program from 1966 through approximately 1969. While in the Boy Scouts, Strauss earned a Star Rank. 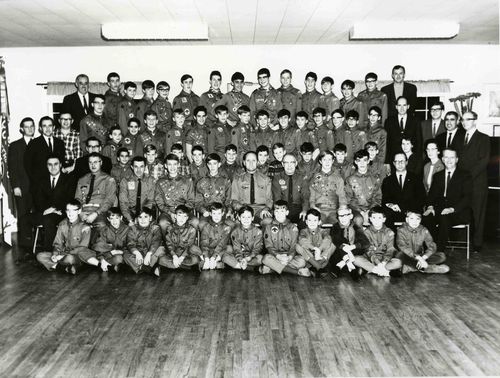 Question: What was the most important thing you learned by participating in the Boy Scouts?

Howard Morrison: “You gotta wanna do it.” A motivational mantra taught to us by one of the summer camp directors.

Matt MacArthur: I was a child of the suburbs so I definitely gained skills and an appreciation of the outdoors that I might not have otherwise. It also offered many leadership and confidence-building experiences. As an adult I more fully appreciate the time that the leaders put in and the interest they took in our development.

Douglas Evelyn: I learned self-confidence, teamwork, appreciation for the natural environment, endurance, problem-solving, and a commitment to public service—all attributes that have served me well ever since.

Q: What is your favorite memory from the Boy Scouts?

Howard: In my troop there was this tradition that when you first got your Tenderfoot pin it was put on upside down until you did a good turn. (The scout slogan is ‘Do a Good Turn Daily’) So I got the pin on Friday night, and on Saturday I mowed the lawn of an elderly neighbor for free and got to turn my pin right side up!

Matt: My favorite part of Scouting was the High Sierra backpacking trips that we took nearly every year. They pushed our limits but allowed us to experience some of the most beautiful wilderness imaginable. My dad, brother, and cousins were also often involved and it was great to share the experience with them. Oh, and then there was the time that one of the guys set a gas can on fire and singed all his hair.

Doug: I remember winter camping trips, tossed egg contests that got out of control, diving for weights in murky 10 foot deep water to qualify for the lifesaving merit badge, spelunking, building fences and lean-tos, and when in Explorers going to Broadway shows and hiking and canoeing 50 miles (each activity) to qualify for the Silver Award, the equivalent of Eagle in Boy Scouts.

Rich: Camping out in the middle of winter in upstate New York during Operation Igloo, a weekend gathering of many troops from around the state, a weekend of self reliance, defying winter’s cold, sleeping in a big tent with all your buddies, with a cushy layer of straw and a sheet of plastic underneath, and non- stop wintertime fun sledding, hiking in the snow, bonfires with my friends and their Dads, and tons of good chow. Chow, that’s what we were taught to call the plateful of hot food we gulped down to replace thousands of calories burnt, and then run off to our next adventure. 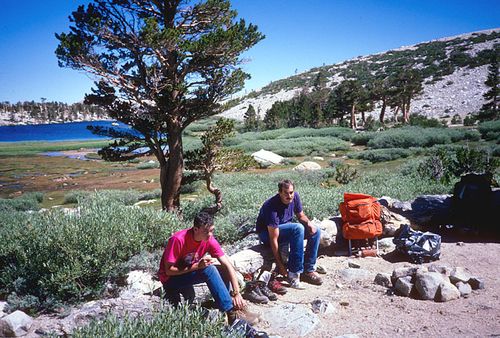 Matt MacArthur (left) during a High Sierra backpacking trip as a Boy Scout.

Q: Do you still have any objects from your Boy Scout Days?

Howard: Yes. Uniform shirt, kerchief and slide, merit badge sash, Handbook, the ‘arrow’ fashioned from a stick that I wore around my neck during my “Order of the Arrow” initiation (it was a scouting honor society kind of thing).

Matt: I still have all of my Scouting awards and patches. I also still use some of the same camping/backpacking equipment I had then. I always really liked the notion that you can get by with just a few carefully chosen, well-made pieces of gear.

Doug: I still have the Bear Cub Scout Book where my parents (as Den Mother and Den Dad) signed off on various “achievements”, including Safety, Knots, Collections, Helps, and Tools. I’ve also got my father’s merit badge sash, some of his Scout Leader books and various badges, neckerchiefs, emblems, and some camping gear.

Rich: Somewhere in my parent’s attic are my patches and my Order of the Arrow sash and stuff. Also my Father’s Assistant Scoutmaster’s hat, my brother’s “Aussie” style hat with some disintegrating animal fur thing attached.

Q: Why did you hold on to these items?

Howard: Why did I save them? The handbook tells you how to tie knots and fashion a tourniquet in case your leg is cut off, so that is sure to come in handy someday. Why did I save the rest of it? Who knows! It’s a life stages thing I guess.

Matt: I guess I keep the awards and patches around because of the work that went into each one, or they trigger memories of particular events.

Doug: All of my objects were saved to show my grandsons.

Rich: I keep them because my Boy Scout days are so many of my childhood’s happiest memories. We had a very active troop during an un-overprotective time.

So, what are your Boy Scout stories? What was the most important thing you learned by participating in the Scouts? Which scouting object are you hesitant to give up because of the memories surrounding it?

Editor’s note: You’re also invited to share your scouting stories on the BSA Web site and add your scouting pictures to their Flickr group.