Back to our roots

Something wonderful is sprouting at the National Museum of American History. This past week I was introduced to the Victory Garden that is growing outside the Stars and Stripes Cafe. The Victory Garden is a living exhibition of a successful war department campaign from World War II and only grows plants that would have been available to the public in 1940 or before. 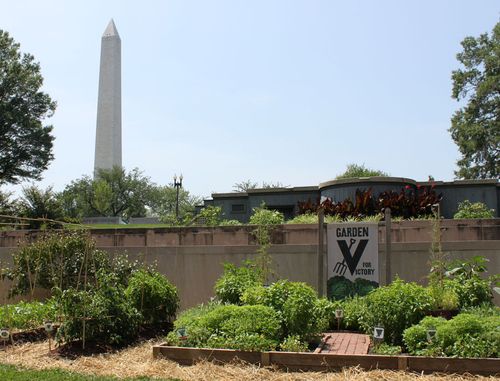 Because of the food shortage in the United States during the war, Americans were encouraged to grow gardens so commercial producers could supply food solely to the military. The war department sponsored propaganda to support the campaign, with slogans emphasizing that “everyone who picked up a garden hoe was a soldier.” Government agencies, private foundations, businesses, schools, and seed companies worked together to provide land, instruction, and seeds to individuals and communities to grow food. The concept of a Victory Garden was born as a result, and led to a surge of home grown produce across the nation. From California to Florida, Americans plowed backyards, vacant lots, parks, baseball fields, and school yards to make room for gardens. Children and adults fertilized, planted, weeded, and watered in order to harvest an abundance of vegetables. During the 1940s, there were more than 18 million gardens nationwide, which accounted for 40 percent of the food production in the United States—impressive to say the least. 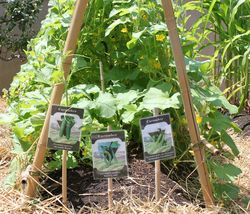 This is one fad that should make a comeback! If you are looking to “go green,” home-grown produce is an ideal way to achieve your goal. The National Museum of American History has embraced this idea by providing its garden’s bounty to the museum’s Stars and Stripes Cafe. The chefs in the cafe incorporate the garden’s crops in the daily menu. Personally, my 15 minute tour of the Victory garden was enough to inspire me to start growing my own garden. There are multiple benefits to organically-grown vegetables. Not only are you producing healthy, quality food, but you are getting fresh air and some exercise. Plus, gardening can be a great stress reliever, and it can be made into a family or community activity. In today’s age of technology and globalization, it would be nice to have a tangible connection with family, as well as the earth.

Editor's note: This is the first in a series of monthly posts exploring the work of Smithsonian Gardens and its relationship to American history. Smithsonian Gardens creates and manages the Smithsonian’s outdoor gardens, interiorscapes, and horticulture-related collections and exhibits. Check back in October for stories from the fall harvest. You can also follow the Washington Post's "All We Can Eat" blog series Groundwork for veggie tales and recipes from the museum's Victory Garden.

Patti Plath is an intern with the Office of Public Affairs at the National Museum of American History.