It is good to be back at the National Museum of American History after a ten-day visit to Shanghai, China. The main reason for my trip was to attend the triennial conference of the International Commission on Museums (ICOM), a diplomatic forum made up of museum professionals from 137 countries and territories. I was there to represent the museum in the intercultural dialogue taking place, and to further our understanding of America’s role in international museums. However, I did leave time to explore this extraordinary city that has had such spectacular growth over the past twenty years. I had a chance to see and experience many of the landmark projects associated with this growth, including the World Expo Centre that attracted more than seventy million visitors (mostly Chinese) in five months, the Mag-Lev train that reaches a top speed of nearly 260 miles per hour, a new twelve-line subway system that serves more than 3.5 million riders each day, and the world’s tallest observation deck at the top of the Jin Mao Tower in the financial center.

So much for superlatives—I was also there for the history. In spite of the relentless commitment to rebuild the city, some impressive remnants of 19th and early 20th century architecture remain, especially in the Bund district along the Huangpu River. I also had a chance to venture out of the city on two day trips to Suzhou, where I.M. Pei has designed a beautiful museum for art and antiquities, and to Hangzhou, a city with extraordinary sculptures of Buddha and one of world’s largest Buddhist temples. I was impressed with the strong presence of history, traditional culture, and religion in spite of the efforts to modernize. Like China, our nation has and will continue to search for a balance between looking to the future and preserving the past. 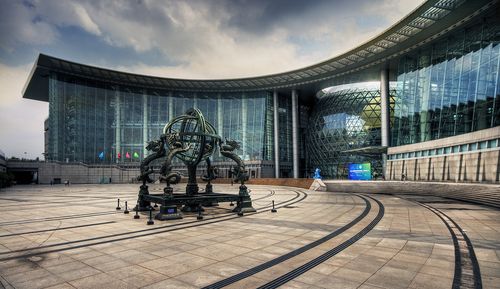 One of the museums I visited in Shanghai was the Science and Technology Museum, which features a natural history exhibition sponsored by our own donor and good friend Ken Behring. At a museum reception, Ken introduced me to Mark Johnson, who teaches an advanced placement class in American history at the Concordia International School in Shanghai, and whose students participated in last year’s National History Day program. Mark invited my wife, Cathryn, and me to meet his class, and asked me to talk about the National Museum of American History. The students were amazing, very engaged in the study of American history and the use of primary sources in their research. They had lots of questions about the museum and my work as director.

Brent Glass and his wife Cathryn with Mark Johnson and his students at Concordia International School in Shanghai, China.

After meeting Mark’s class, we joined him as he led a tour of the city for teachers from international schools in East Asia. We saw several historic sites associated with major events such as the Opium Wars, the influence of western powers in the 1920s and 1930s, and the rise of Communism after World War II. We concluded our tour in the Jewish ghetto where more than twenty thousand Holocaust refugees settled after escaping from Germany and Austria. The refugees made it to Shanghai with the help of a courageous Chinese diplomat stationed in Vienna. The story of how they survived during and after WWII is told in a small but powerful exhibition in a former synagogue that now serves as a memorial and a museum. One of those refugees was Michael Blumenthal, whose family left Germany in 1939 and resettled in the United States after the war. In 1977, he was named Secretary of the Treasury by President Carter.

The story of these refugees and the story of the millions of Chinese who have endured a traumatic history—invasions, civil war, famine, and revolution—is inspiring. To see such a booming, lively, and culturally rich region that has grown in the face of these challenges reminded me of the resilience of the human spirit against overwhelming odds. At this holiday season, that is an important lesson to remember.

Brent Glass is Director of the National Museum of American History.