Truth and fiction: My connection to American Girl Addy

Editor’s note: To commemorate the 150th Anniversary of the Civil War, the National Museum of American History is partnering with American Girl to bring the stories of the Civil War to life for students and families through the real objects and people who lived during the war. Starting February 5, 2011, explore life during the Civil War with a new self-guided museum tour, Addy's World. You can download the guide here. If you can't visit the museum in person, check out Addy-related online resources from the Our Story website.

I feel my face warm into a smile as I look into the brown glassy eyes of the American Girl Addy. While I never owned the Addy doll, the bond I shared with Addy was an important part of my childhood all the same.

When I received an Addy book for Christmas as a child, it was my first introduction to the sorrowful and moving history of slavery. Addy was a slave girl who made a harrowing escape North to freedom with her mother. Addy’s trials and difficulties in both slavery and freedom struck me deeply, awakening my own sense of cultural heritage as an African American. I knew it was just a story, that Addy was only a character in a book—but still, long ago, there once were many all-too-real girls just like Addy and in many ways, just like me. That knowledge stayed with me, leading to what I consider a defining moment in my childhood. 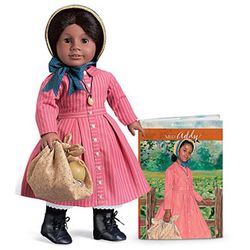 It was the first day of second grade, and I was yet again the only black student in my class at my private, predominantly white, Southern school. Having attended the school since preschool, I was used to it. School was school and I was the black girl, the unfortunate reality of going to what was deemed county-wide as “one of the best schools.” But that day I truly came to feel like I was in the minority. Somewhere along the line of discussing upcoming history topics for the year, my teacher, a pale, grinning, jolly-sized grandmother type of woman, whom we shall call Miss Molly, sweetly explained that “Slaves—for the most part—were happy.”

I cannot recall what led her to this statement, but it is forever burned into my memory. Slaves were happy!? I wanted to stop her, ask her if she misspoke, but something in the pit of my stomach kept me silent. I knew what I knew from reading a book—a good book, but not a textbook. And teachers always know what they are talking about, otherwise they wouldn’t be teachers. Right? Then I thought of Addy. My mind conjured up passages and images, the separation slavery caused in her family, the unjustified and cruel treatment it subjected her to, the looming shadow it cast over her life until she found the light of freedom. I knew my teacher was wrong. I would later discover that Miss Molly was only a substitute teacher and the true history of slavery (more or less) would be taught later that year.

Addy will be at the museum beginning February 5 as part of the Black History Month family celebration, offering the public the opportunity to learn more about Civil War history by exploring Addy’s World. Given the impact she had on me, I can easily imagine Addy guiding other children to a similar appreciation of history. To this day, I am grateful for Addy because even though she is only a character in a story, or a doll with gleaming brown eyes, she helped me at a very young age to tell the difference between history and a horribly skewed perspective, between truth and fiction.

Erica Richardson is an intern in the Office of Public Programs at the National Museum of American History.