Making room for blossoms and monuments

As a part of a project for an exhibition about the Civil War titled “So Much Need of Service”: The Diary of a Civil War Nurse, I had the opportunity to look at an antebellum map of Washington, D.C., seen in detail below. 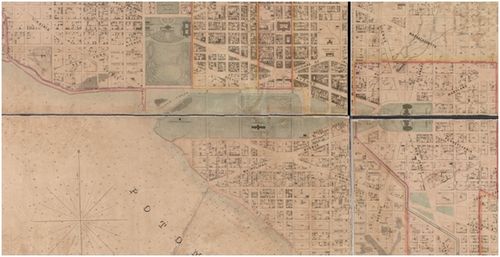 Looking at the map, most of the streets followed Pierre L’Enfant’s layout for the Capital City. However, the National Mall was quite different with fewer buildings, more trees, and a canal running through it. What really caught my eye though was the part of the city west of the Washington Monument--or rather its absence. The land where the Lincoln, Jefferson, Vietnam, and Martin Luther King Jr. memorials now stand did not exist until 1890. There were no blossoming cherry trees and no Tidal Basin. I wondered, how and why did the land get there? Here’s what I found out. 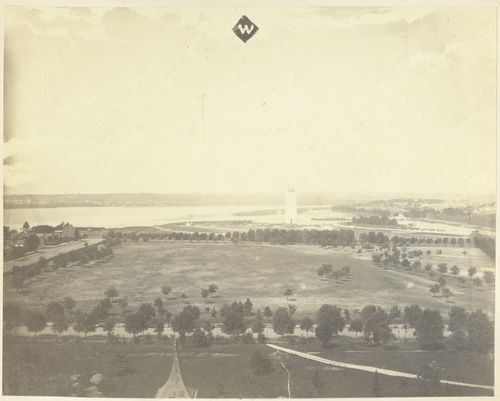 Artist and naturalist, Titian Peale, took this photograph of the western part of the Mall giving us a good view of the water beyond the Washington Monument before the reclamation project occurred. Photo courtesy of the Department of Rare Books and Special Collections, University of Rochester Library, www.lib.rochester.edu/rbk

When Washington, D.C., was initially designed, the land currently known as West and East Potomac Park was a tidal wetland known as the Potomac Flats. In an 1863 panoramic photograph taken from the Smithsonian Castle tower showing the western view, the Potomac Flats can be seen beyond the incomplete Washington Monument (completed in 1885). 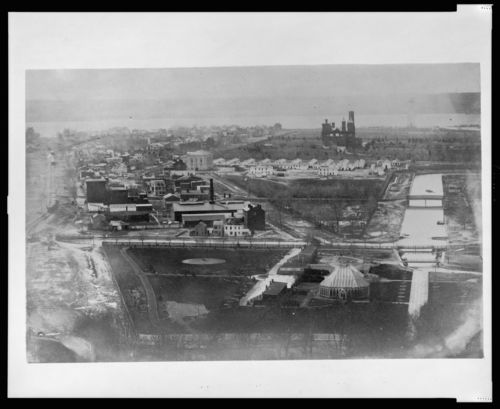 The Washington Canal, which incorporated part of Tiber Creek, ran along the north edge of the National Mall (now Constitution Avenue) connecting the Capitol with the Potomac River. The canal is clearly visible along the right side of the photo above, taken from the Capitol during the Civil War. Sewage was dumped into the canal and flowed to the river onto the flats just south of the White House grounds. Because sewage accumulated on the flats as opposed to draining out to the river, the area became extremely filthy, had a foul stench, and became a breeding ground of disease. While officials debated whether action should be taken to correct this health hazard, the final straw came in February 1881 when a huge snowfall melted causing the Potomac to flood across the Mall to the National Botanical Gardens at the base of the Capitol.

The Army Corp of Engineers dredge the river. Photo courtesy of the Smithsonian Institution

In order to clean up the flats and to make the Potomac more navigable, Congress directed the Army Corp of Engineers to dredge the river. Sediment removed within the shipping channel was used to fill in the flats. The work started in 1882 and continued until 1890. In the photo above, you can see the river being dredged in the area that would form the East Potomac Park and the waterway between the park and the docks that is now the Washington Channel. When the project was completed, Washington, D.C., had 628 new acres of land as seen below. 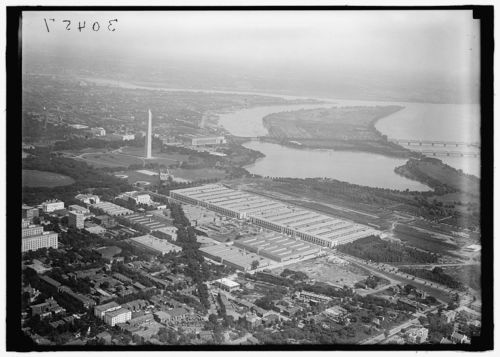 Over the years, the land became populated with many different attractions—memorials, a recreational center, and, of course, the cherry trees. The cherry trees were a gift from the mayor of Tokyo and were planted in 1912. This led to one of the most popular festivals in Washington, D.C., the National Cherry Blossom Festival. 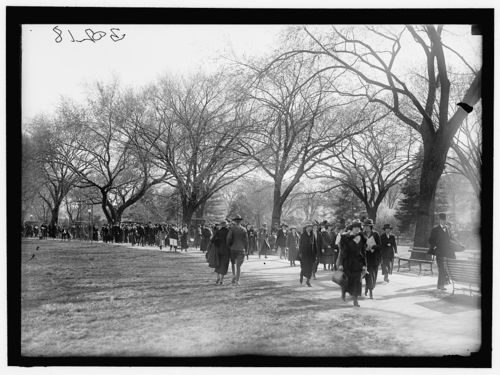 Visitors take a stroll through Potomac Park to admire the cherry blossoms in 1919. Photo courtesy of the Library of Congress, LC-DIG-hec-12001

While the reclamation project aimed to prevent the 1882 flood from occurring again, the threat of a major flood still exists. The Army Corps of Engineers is now working on building a levee system to prevent another hundred year flood.

Editor’s Note: What are your memories of the cherry blossoms, Potomac Park, or the changing landscape of Washington, D.C.? Please share your thoughts in “comment” section below!

Drew Robarge is a museum technician in the Division of Medicine and Science at the National Museum of American History.