Tracking the condition of objects in Julia Child’s kitchen

Editor’s Note: Today’s post is the second in a series of six about the museum’s work in Julia Child’s kitchen. Amanda Browe is a Museum Studies graduate student at The George Washington University.

Visitors to the museum earlier this year may have noticed something unusual when they arrived at the Bon Appétit! Julia Child’s Kitchen at the Smithsonian exhibition—a number of people actually in the kitchen during visiting hours. This prompted quite a few questions: “What are those people doing in the kitchen?” “Why are they wearing gloves?” “Why are they touching the objects?” One of the most popular questions was, “Can I go into the kitchen too?” Unfortunately, the answer is no. To protect the kitchen, entry is limited to people who are performing necessary museum tasks, which, for several weeks this spring included four of my fellow graduate students and me. Never fear: we were not alone in the kitchen—we were supervised by our professor and also by museum staff involved in the creation and installment of the exhibit. 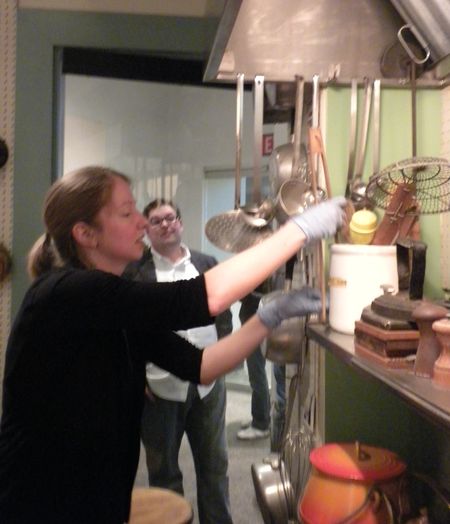 George Washington University Museum Studies student working with an object as a museum visitor looks on. The student is wearing nitrile gloves, which protect the object from oils on the student’s hands.

For those unfamiliar with the kitchen’s layout, it can be viewed through three acrylic viewports and this can create a bit of a fishbowl effect. The first time I was in the kitchen I felt that not only were the objects on display, but suddenly so was I. It can be a bit nerve-wracking to handle the objects while people watch, take pictures, and talk about what you are doing (the viewports aren’t soundproof and it can be distracting listening to the visitors). School children seem to be the most excited by our presence in the kitchen and they often knock on the acrylic to get our attention. My favorite experience with museum visitors involves one very confused kid who shouted, “Are you real?” When I turned and answered in the affirmative, he shouted and jumped back (apparently we look like very life-like mannequins). The knocking and camera flashes have become commonplace and now I find it much easier to focus.

But what exactly are we doing?  We are assessing the condition of the objects in the kitchen.  Museum practice involves documenting the condition of objects on a regular basis, and especially when the objects are moved. In addition, we are noting any effects from what the museum profession refers to as "agents of deterioration," including light, temperature, relative humidity, and contaminants (such as dust of air pollution).  We are recording the environmental conditions of the exhibit by taking light level, temperature, and relative humidity readings, which will help the museum maintain the best conditions for the objects.

Museum visitors who stopped to watch us may have noticed us filling out forms. These forms are called object condition checklists and they are used to evaluate and record the condition of the kitchen objects. An object condition checklist is the most practical method given the situation—we are assessing over nine hundred objects. These checklists allow us to gather basic facts about the object (such as its material components) and any problems the object may be experiencing (e.g., dust or discoloration). 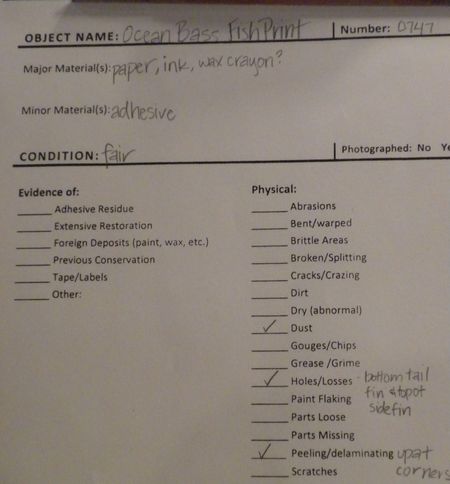 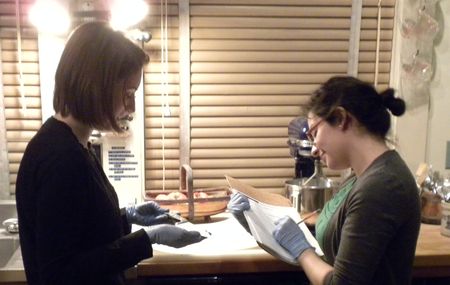 Students filling out an object condition checklist for one of Julia’s many knives.

Preserving objects that are part of a long-term exhibit is dealt with differently than object preservation for short-term exhibits. Preservation issues can become more complicated when the objects are going to be displayed for a long period. During the early stages of exhibit planning, it is important to address ways to minimize the risks from agents of deterioration. As the kitchen is going to remain on display in another gallery, each student is focusing on a possible high-risk material. An example is paper materials, which are very vulnerable to changes in temperature, relative humidity, and exposure to inappropriate light levels. These agents of deterioration can cause discoloration, embrittlement (the paper becomes very dry), and cockling (the paper can wrinkle and bulge). Based on our research, we made preservation recommendations for each of these materials. These preservation recommendations and object condition checklists will aid the museum staff in ensuring that the proper preservation methods and care be given to Julia Child’s many tools and gadgets so they can continue to be displayed for the public.

Amanda Browe is a Museum Studies graduate student at The George Washington University.