It’s wedding season! With the recent royal wedding and my own daughter finalizing plans for her summer wedding, I’ve been asked by several people if the museum collects bridal gowns. Weddings are very much a part of the fabric of society so of course we have a few from different time periods. Each dress tells a unique story.

In the 17th and 18th centuries, wedding rituals centered on the process of welcoming a new couple into the family and community. Family, friends, and neighbors contributed gifts, money, or labor to help a couple set up housekeeping. In the late 19th century, weddings became first and foremost a family affair, with private invitations replacing banns or announcements of marriage intentions from the church pulpit. At the same time, weddings became increasingly female centered. Weddings became both a time for and a symbol of family unity.

As we mark the anniversary of D-Day I’d like to share the story of Rosalie Bourlund’s Parachute Bridal Gown, housed in the museum’s costume collection. This dress is a romantic example of female ingenuity on the home front at the end of World War II. 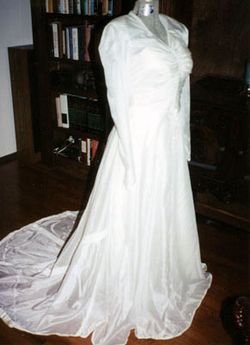 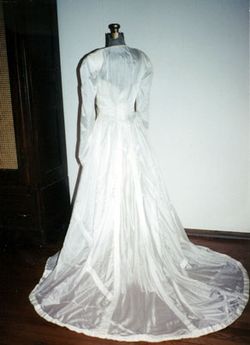 Queen Victoria is credited with making the ivory wedding gown popular during the 19th century, having been married in a much celebrated cream satin and lace gown trimmed with orange blossoms. Bridal gowns followed the fashion of the time in terms of sleeve style, neckline, and general silhouette. Wedding dresses were later made over or reused, until sometime between 1900 and 1930, when the wedding gown became more iconic as a “once worn” dress. By the 1920s, large ceremonious weddings spread among all classes. Weddings developed into a major industry as brides turned to specialized bridal consultants for assistance in organizing weddings. Bridal departments were introduced into department stores with one stop wedding displays and gift registries. Wedding photography became a steady, if not lucrative business; wedding stationery became a standard for the middle classes; and bakeries, caterers, and florists flourished as wedding vendors.

During the Great Depression and World War II, couples continued to marry but weddings became more “homegrown.” According to a 1939 study by sociologist B.F. Timmons, one third of couples were doing without some element of the wedding ritual due to the difficult financial times such as the engagement ring, a new bridal gown, a reception, or perhaps delaying the honeymoon. Wartime weddings were featured in department store window displays as a joyous element of society but “practical gifts” were encouraged over silver or manufactured objects that might impact the war effort. The wedding industry continued to develop as a major business, as bridal publications gave advertisers a forum for conducting market research while promoting wedding goods. Publications such as Bride’s (1934), Wedding Belle(1948), Modern Bride (1949), and Bride-to-Be (1955) were developed from the tradition of etiquette books and articles in women’s periodicals from the previous century.

During World War II, fine fabrics such as silk were scarce, having previously come from Japan and China. Nylon was also scarce as it was being manufactured primarily for military use. Recycling or reusing materials was not only encouraged by the government to assist in the war effort, but also a necessity due to the difficulty and cost to obtain anything new.

Parachutes were used by the military in both World War I and World War II and were made from silk or nylon due to the fiber strength. They were an excellent source for scarce fabric. It was not uncommon for returning soldiers to bring home parachutes as mementos, and that they would become a source of fabric for wedding dresses, undergarments, and in some cases hosiery. My great uncle supplemented his income by recycling parachutes while working for a New York City tailor. Unused reserve chutes were the most sought after as damaged chutes had less usable fabric. Wedding gowns made of parachutes were both economical and, most importantly, honored the servicemen coming home from battle. They were worn with patriotic pride.

The material used in Rosalie’s gown not only saw combat, but was responsible for saving her groom’s life. Young Temple Leslie Bourland had enlisted in the army in May of 1941, not too long after graduating high school. He became a radio operator on a C-47 Douglas Skytrain for the 77th TC Squadron of the 435th Troop Carrier Group stationed first in England, and then in France. On March 25, 1945, during Operation Varsity, his plane “Sleepy Time Gal” was hit by enemy fire. He and the crew chief bailed out over the Rhine, near Wesel, Germany, at 590 feet while under fire. As a result, his parachute sustained several bullet holes and he suffered a hip injury. Bourland and his comrade spent a couple days in a foxhole and were able to use the parachute as a blanket to stay warm until they were discovered by Allied troops. He returned to his unit in time to participate in the Normandy Invasion on D-Day—June 6, 1944.

Rosalie Hierholzer was introduced to Les Bourland in the summer of 1945, while living with her aunt Lora and her uncle Russell. She was working as a secretary in San Antonio, Texas. While visiting Rosalie during their brief courtship, Les showed his fiancé and her aunt the mementos of his war exploits. Included in his trunk of mementos was his battle-scarred parachute. Rosalie’s aunt Lora offered to make her wedding dress, after determining that there would be enough of the fine material once she cut around the bullet holes. The gown was made domestically, specifically for the bride by someone who knew her, which was typical of other wedding dresses of the time and unlike those made today.

Rosalie’s bridal gown is designed with a fitted bodice, seed pearls outlining a sweetheart neckline, 26 small covered buttons down the front, and long, full sleeves. The skirt is full with an empire waistline and has an oval train which retains some of the military issue seams.

(Note: We have another parachute wedding gown in our collection, this one worn by Ruth Hensinger.)

As the economy recovered after World War II, the wedding industry once again flourished. Celebrity weddings such as the highly publicized royal wedding of Prince Charles to Lady Diana Spencer and the most recent royal wedding of their son Prince William to Kate Middleton are very good for business. Even with the great financial burden a traditional wedding represents, a wedding celebration remains a joyous event for most families as well as a cultural expectation of the community. While popular wedding-themed cable shows and bridal trade fairs showcase reception venues, honeymoon destinations, and wedding cake designs, the bridal gown remains the main focus within wedding ceremonies. The key to any wedding story is still what the bride wore.

Do you have an interesting story about a bridal gown or wedding heirloom? Please share it in the comments below!

Debbie Schaefer-Jacobs is Associate Curator in the Division of Home and Community Life at the National Museum of American History. 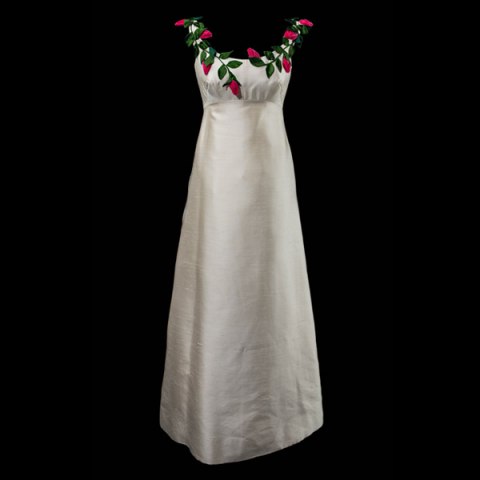 Sewing for joy: Ann Lowe
"I was 17 years old at the time and the dress made me feel so grown up and beautiful," Pauline "Polly" Carver Duxbury wrote about the dress... 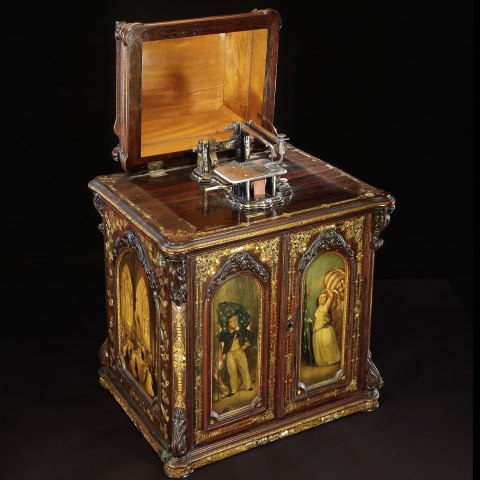 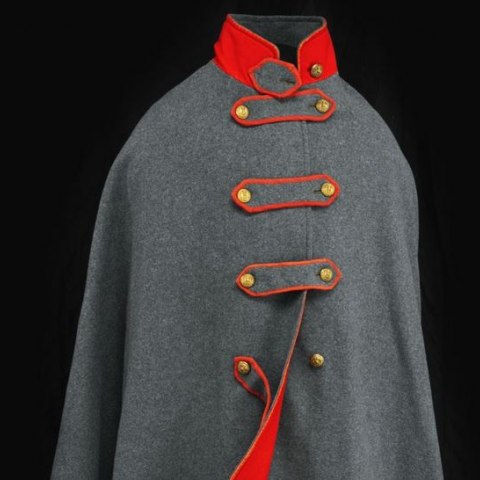