Why I love working at the National Museum of American History 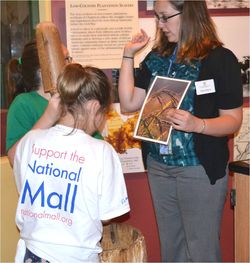 The author conversing with visitors at the history cart.

Every so often, I am reminded of why I love working at the National Museum of American History, and a recent encounter with visitors at a hands-on history cart in the Communities in a Changing Nation exhibition was no exception. I had an in-depth conversation with three girls, between the ages of 10 and 11, that lasted for 45 minutes. The experience made my day (make that the entire summer!) and showed me once again why I love history and working in museums.

The purpose of the hands-on cart is to explore the lives of rice-cultivating slaves in South Carolina, North Carolina, and Georgia in the 18th century. Visitors may closely examine and even touch objects that were used to cultivate rice (a fanner basket and mortar and pestle) and cultural artifacts (musical instruments and masks made out of gourds).

The conversation began when a young girl from California asked about the mortar and pestle while I was manning the cart. Through guided questions and hands-on exploration of the object, she learned how slaves used the objects to husk and skin rice. When I told her that the job would have been reserved for a girl around her age, her interest piqued, and she began to ask deeper questions about slavery and its implications. The first few questions were simple: "What would a slave do all day?" and "Were masters mean to their slaves?" Her questions began to draw a crowd, notably two other girls, from Maryland and New York. 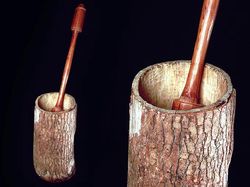 Mortar and pestle. Courtesy of the Library of Congress.

Although there were others who listened and participated, these three girls primarily drove the conversation. I answered their questions honestly and did not assume that the material was too challenging for them. When we ventured into more complex themes, I told them that they should stop me with questions if a concept was too difficult to understand.

I explained the regional differences that affected slaves' lives and how slaves did not all experience slavery in the same way; some had to deal with harsh masters, while others were treated like members of the family. We discussed the complicated relationships and emotional connections that developed between some slaves and their masters. The girls asked about children born into slavery, particularly those born to parents of mixed black and white ancestry. As a group, we tried to understand the complex emotions that slaves would have experienced, as well as grasp the perspective of slave-owners who had been raised in a society in which slavery was the norm. 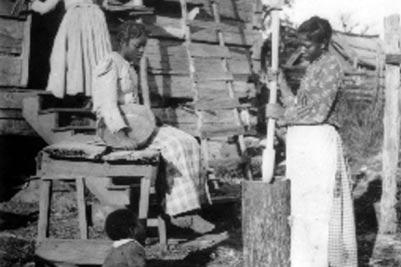 Slave using a mortar and pestle. Courtesy of the Library of Congress.

I would have never guessed that I could parse through such complex themes with tweens at a museum. But, by using terminology that was appropriate for their age, the girls not only understood these ideas, but learned from them as well. I defined cultural agency as the ways in which people control their own lives by maintaining their culture and sense of individuality. After learning this concept, one girl asked, "How did slaves have agency on the plantation?" When I explained that some slaves broke tools, ran away, and preserved their culture through stories, song, and religion, she responded, "So they were just bending the rules to do as much as they could get away with?"

Through this comment, she demonstrated that she comprehended the concept and was listening closely. I could have cried from pride and happiness: I truly believe that the girls walked away from the history cart with a deeper understanding of a number of new and important concepts—namely, that slaves had widely diverse experiences, that not all slave-owners were the same, that rice was a significant low-country crop with vital cultural meaning, and, most importantly, that slaves and masters were human beings who felt pain and led emotionally charged lives under the brutal institution of slavery. I don't think I have ever had a conversation about slavery that was so intellectual, insightful, and challenging, especially while interacting with guests at a museum. Those girls forced me to reflect on how I perform my job at the museum and to realize that I can help our visitors to think more critically about the past. Ultimately, I hope the girls learned as much from me as I did from them.

Have you ever had a transformational experience as an educator or a museum visitor? Tell us about it in the comments below! If you want to learn more about the lives of rice-growing slaves, check out this lesson plan.

Katie March is a Goldman Sachs Fellow in the Office of Education and Public Programs.