Culture a la Carte: Would you like some Han Dynasty with your meal? 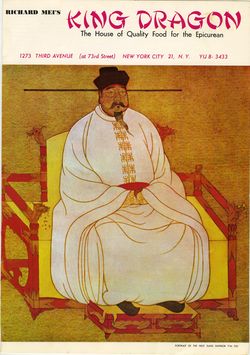 I recently delved into the museum’s newly acquired menu collection. My focus was a sub-set of the collection: the Chinese menus, which span nearly three decades and come from all over the United States. I was curious to see what the menus could reveal about the history of Chinese food in America. As I perused the collection, I realized that Chinese restaurants don’t simply sell food—they also sell a cultural experience, à la carte.

Historically, many Americans first encountered Chinese cuisine while laboring in mines or on railroads, where Chinese immigrants often worked as cooks. By the late 19th century, increasing numbers of Americans were venturing into Chinatowns in both New York and San Francisco, in search of cheap, tasty meals. Others were drawn to Chinatown for different reasons: Bohemians saw Chinese dining as a sensual and exotic experience, and wealthier patrons sought high-end culinary adventures. Originally established to serve fellow expats, Chinese proprietors saw their business grow as more American customers frequented their establishments. 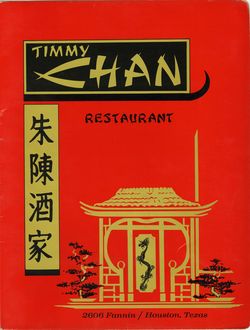 The increased interest in Chinatown as a tourist destination coincided with the Chinese Exclusion Act of 1882 and its ensuing amendments, which suspended Chinese immigration into the United States and restricted opportunities for Chinese immigrants already settled in the country. Realizing that their livelihood depended upon bringing business into Chinatown, proprietors took extra measures to lure more customers: they cleaned up the streets, adopted an Oriental décor for their restaurants, and adjusted their dishes in accordance with the American palate. In other words, Chinatown exaggerated its authenticity to attract more customers. Dishes like egg foo young, chow mein, and chop suey may have proved immensely popular with American diners, but they were, in fact, far from authentic. Ironically, part of the appeal for Americans lay in their belief that they were consuming authentic Chinese cuisine. Chinatown was so popular, that between the years 1870 and 1920, there was a nearly 7,000 percent increase in the number of workers employed by Chinese restaurants. 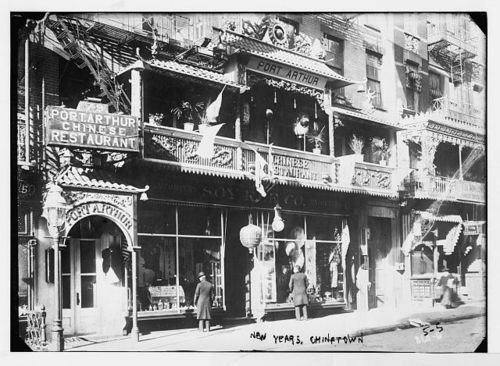 In the aftermath of World War II, American policies shifted in tandem with greater tolerance for minority groups. Scholar Madeline Y. Hsu defined this as a shift from “racialization to ethnicization.” As long as Chinese immigrants were considered a “race,” they could never blend into American society, but “ethnicity” was a more fluid concept that blurred the lines. Americans from all walks of life began wanting to experience cultures different from their own. 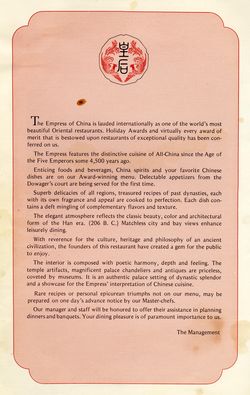 See in this menu: "an authentic palace setting of dynastic splendor and a showcase for the Empress' interpretation of Chinese cuisine..."

Again, Chinese culture could be packaged, promoted, and sold to customers. The 1950s and 1960s saw a wave of Chinese American entrepreneurs who opened high-end restaurants, among which are two notable San Francisco establishments. Johnny Kan portrayed his eponymous restaurant, which opened its doors in 1953, as authentically Chinese and rooted in the imperial era, and emphasized its cleanliness and quality service. Eight years later, Cecilia Chiang opened The Mandarin, a restaurant elaborately decorated with Oriental artwork, including embroideries allegedly taken from the Peking palace. Again, Chinese restaurants were offering customers something far more than just food. Alongside their meals, diners received a heaping dose of history, culture, and curious claims of authenticity.

With this history in mind, I was not at all surprised to find in our collections a menu from the Empress of China, located in San Francisco. Dating from the mid-1970s, this menu exemplifies how Chinese restaurants package and serve culture, often prioritizing the exotic over the accurate. The Empress of China offered customers cuisine dating from 2674 BC, architectural inspiration from 206 BC, and an artistic impression of a 1238 AD temple shrine. Visitors could travel across space and time to enjoy an “authentic” culinary experience. 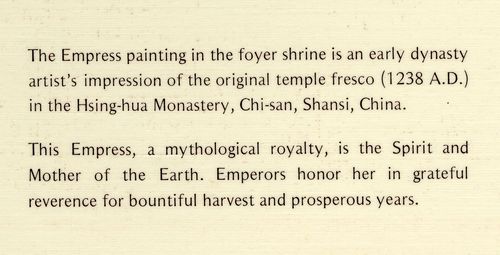 Menu describes an artist’s impression of a temple shrine from 1238, The Empress, mid-1970s. 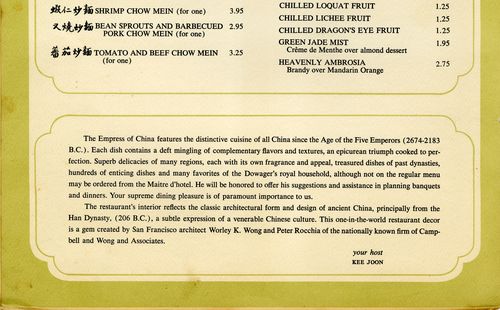 Menu presents cuisine from 2674 BC and architectural inspiration from 206 BC. 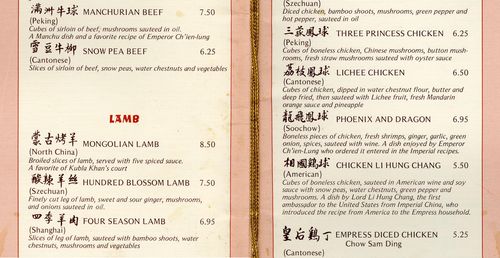 Menu describes Manchurian Beef and Phoenix and Dragon as enjoyed by Emperor Ch’ien-lung, and Mongolian Lamb as enjoyed by Kubla Khan.

These Chinese menus in the collection mark an important step toward telling the story of Chinese immigrants in the United States. If you have a story or object that you’d like to share, please use the comments below, or e-mail us at nmahweb@si.edu with the subject “Chinese Food.”