The Scurlock Studio was a photographic business operated by an African American family in Washington, D.C., from 1911 to 1994. Founded by Addison N. Scurlock, the small company also employed his wife Mamie, and later their sons, Robert and George. Addison died in 1964, and George retired from the business by about 1980, leaving Robert to maintain the studio until his death in 1994. Although the primary activity was portraiture, the Scurlocks also did photojournalism and founded one of Washington’s first professional color processing facilities. Among the Scurlocks’ portrait subjects were many African American notables, including entertainers such as Duke Ellington, Marian Anderson, and Lena Horne; intellectuals such as W.E.B. DuBois; and civil rights leaders, including Mary Church Terrell and—certainly the most famous of all—the Rev. Dr. Martin Luther King, Jr. 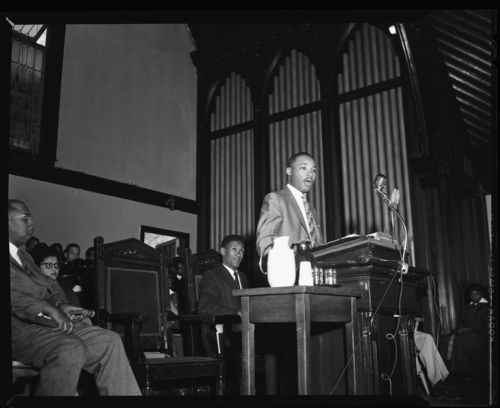 The Scurlocks maintained a long business relationship with Howard University as its official photographers. They photographed commencements and sports, made graduates’ individual portraits, documented student life, and photographed noteworthy visitors to the campus. Thanks to its relationship with the federal government, Howard University could count on visits from U.S. presidents and their families, so the Scurlock Studio photographic archive, now in the museum’s Archives Center, contains photographs of Presidents Calvin Coolidge, Herbert Hoover, Franklin Roosevelt, and on through Bill Clinton. Frequently presidents were shown giving commencement speeches, and Eleanor Roosevelt was captured in repartee with Howard’s longtime president Mordecai Johnson during her visit to the art gallery. 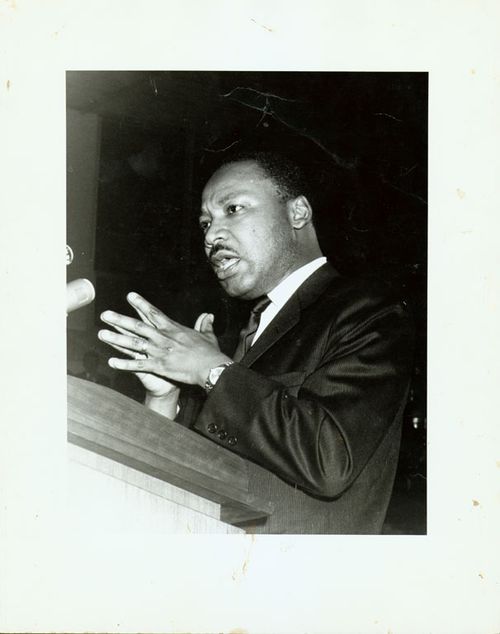 For all these reasons, it is not surprising to find photographs of Martin Luther King, Jr., in the Scurlock photographic archive. Although there does not seem to be a formal studio portrait of this great civil rights leader in the collection, his visits to the Howard University campus were preserved on film. Of particular note is a photograph showing the baseball icon Jackie Robinson, standing shoulder to shoulder with Dr. King in their academic gowns, taken on June 7, 1957, when they each received the honorary degree of Doctor of Laws from the university. Robinson, who had just retired from professional baseball earlier that year, was beginning to show his age in this image, while the youthful King—less than thirty years old—looks self-confident and serene. 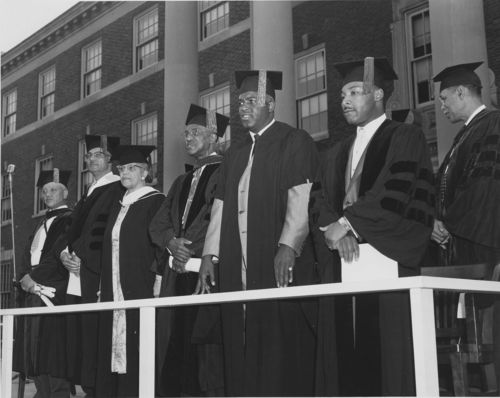 Jackie Robinson and Martin Luther King at Howard University in 1957

Other photographs of Dr. King on the Howard campus capture visits in November of the same year, as well as others in 1956, 1960, and so on. We do not yet know the stories behind these other visits, but hope that research at Howard University, which naturally owns prints from Scurlock photographs, will provide documentation and additional description for the Archives Center’s holdings. We cannot even be certain, based on the negatives and prints in the Archives Center, who made the photographs of King, especially the image of the young clergyman with the legendary baseball player. It seems likely, however, that George Scurlock was the photographer. Addison was the primary Howard photographer up through the 1930s, but we know that during the years of World War II, while Robert was in Italy with the Tuskegee Airmen, George was kept extremely busy photographing on the Howard campus, because he complained in a letter about the workload.

I interviewed George Scurlock several times before his death a few years ago, and while I managed to collect a number of stories about his experiences, I know that there had to have been countless remarkable recollections and reminiscences about the subjects of Scurlock photographs. I certainly wish I had asked about the Robinson-King photograph in particular: did he take the picture, and what did he remember about those historic moments?

David Haberstich is Curator of Photography, Archives Center at the National Museum of American History.