Calling all booklovers: A mysterious binding

One of the treasures held by the Division of Culture and the Arts is a beautiful book in a splendid binding. We know a good deal about the book, its history, and its importance, but some questions remain, particularly about its binding. It’s an intriguing mystery. 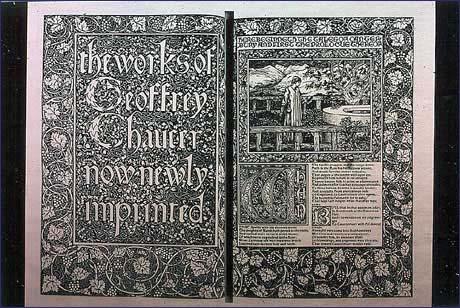 The Works of Geoffrey Chaucer was published by William Morris at the Kelmscott Press in England in 1896. Printed in red and black, it contains wood engravings designed by Edward Burne-Jones with types, borders, and initials designed by Morris. Known as the Kelmscott Chaucer, it is acknowledged to be one of the most beautiful books ever made. As a fine limited edition and the last Kelmscott imprint before Morris’s death, copies have always been in demand. 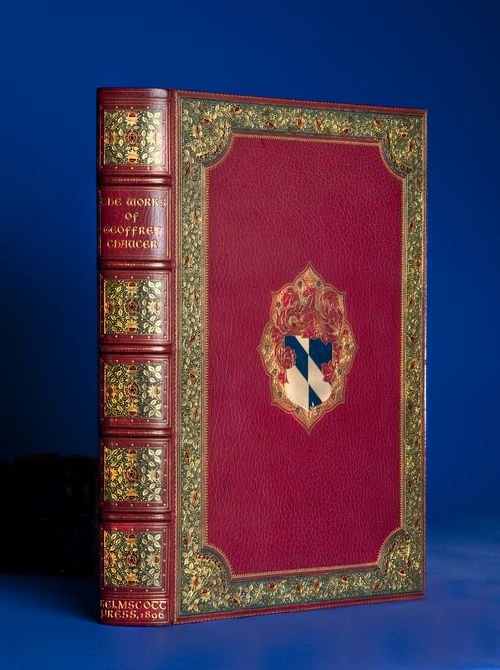 The binding of the Kelmscott Chaucer

A new census locating all known copies of the Kelmscott Chaucer has just been published by William and Sylvia Holton Peterson. Today, according to the Petersons, there are more copies in the United States than in any other country. Working with the Petersons to describe the museum’s copy enabled us to learn more about its history but left us wanting to know more. 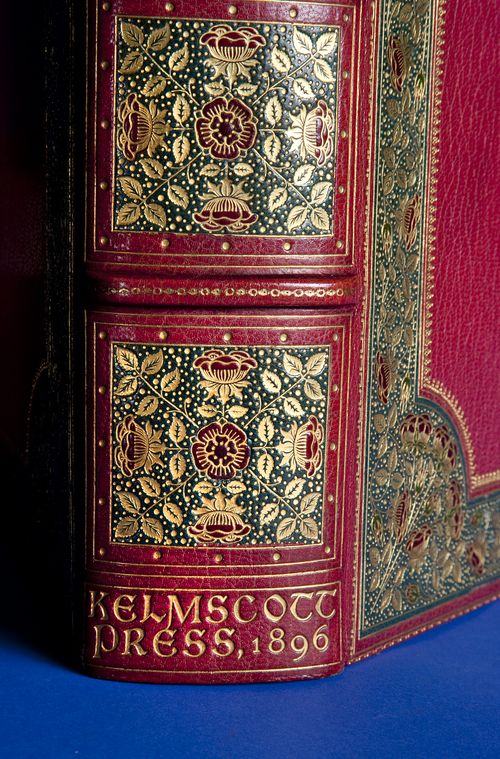 Close-up view of the spine, showing the Kelmscott name and date.

Our copy was acquired for the Hall of Printing and Graphic Arts in honor of the 1964 opening of the museum. Senator Clinton P. Anderson of New Mexico, a Congressional member of the Smithsonian Board of Regents, presented it as a gift in 1962, but the early history of the book’s ownership is incomplete. We do know that Senator Anderson acquired it in 1948 for $1,500. Prior to that, the volume was part of the collection of publishing magnate William Randolph Hearst who sold it at auction in 1938, leaving a gap of ten years between those two owners.

We don’t know where or when Hearst acquired it, but it had been listed for sale in a previous auction in 1919, sold by order of Francis P. Garvan, Alien Property Custodian, suggesting that it had been the property of a German collector or book dealer whose assets had been seized by the U. S. government during World War I.

The magnificent binding provides clues that identify our copy of the book through these various sales. It is bound in full rose-colored Moroccan leather, with decorative borders displaying colorful floral inlays and gold tooling. Chaucer’s arms are inlaid and gilded on the front cover, and around the borders of the inside covers are lines from a Keats sonnet written in response to a verse once thought to have been by Chaucer. Clearly, with such a fancy binding, signed with the gold stamp of the London binders Sangorski and Sutcliffe, it would be hard to mistake this copy for another. 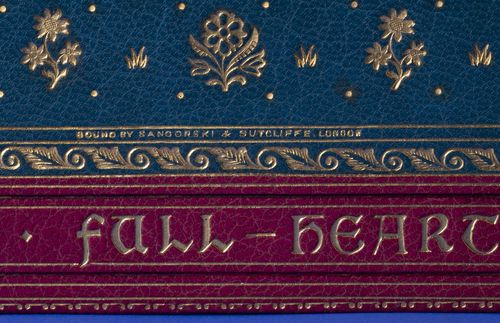 The inside of the front cover, showing the gold binder’s stamp.

Yet there are still things that we don’t know about the book. The publisher’s original bindings included quarter-linen over boards or full pigskin, so we know that our binding, which is quite different and distinctive, was put on the book at a later date. Working with Shepherds Bookbinders Ltd. of London, the successor firm to Sangorski and Sutcliffe, we have tried to trace the history of the binding to learn more about the provenance of our book.

Shepherds believes it is most likely the work of George Sutcliffe and that it would have been made sometime after Francis Sangorski’s death in 1912. But we don’t know who commissioned it or how it came to be in New York by 1919 to be sold as alien property. We’d like to know more about the ownership of the volume and who enjoyed it in the years before it came to the museum. We are proud to include such a splendid copy of this important book in the National Collection, and we hope to continue to add more information to its story.

Helena E. Wright is Curator of Graphic Arts with the Smithsonian’s National Museum of American History.