Honoring our veterans: Returning to the battlefields

Every year over a million visitors tour Gettysburg National Military Park in Pennsylvania, site of the Civil War battlefield. They camp, hike, visit monuments, watch reenactors, and take photographs. What they see is a carefully maintained landscape of green fields and wooded hills interspersed with stone monuments and wooden fences. But had they been there in the days after July 3, 1863, they would have seen something much different. Fields littered with dead soldiers in blue and gray, grass trampled and the haze thick with the scent of sweat, gunpowder, and decay. 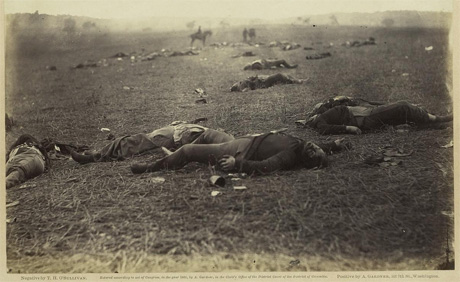 Yet people were drawn to the fields then as they are now, and not only to bury the dead. The military history collections contain many battlefield relics from a variety of wars, collected in the aftermath by individuals with a variety of motivations. Some, unfortunately, were probably treasure hunters, looking for objects of value. Some were looking for marks of identification that would enable them to write home to the family of a fallen soldier. Others were simply looking for physical reminders of the almost unimaginable events that had taken place only days before. Buttons and belt buckles were popular objects to collect, because they were small and could be easily slipped into a pocket or kept on a shelf.

Others were more sentimental. Currently on exhibit in The Price of Freedom: Americans at War is a New Testament bible that was taken from the person of James H. Stetson as he lay dead on a Gettysburg field, recognized by the person who saved it as perhaps not an object of monetary worth, but one that would have had great sentimental value to Stetson and his family. 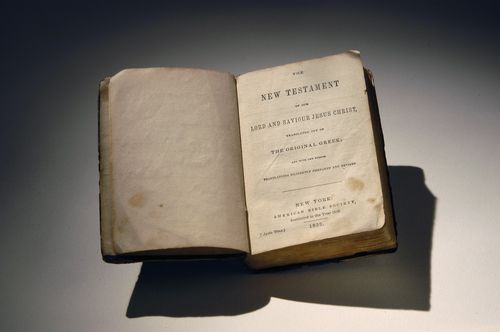 One of those early visitors took a small ambrotype in a wooden frame from the body of a now-anonymous Union soldier. The haunting image shows a woman holding an infant, both of them with their eyes fastened on the camera. This object has touched me in a way that no other ever has. It reminds me of the pictures of my family in my wallet. It is a tangible reminder that this bloody conflict took the life of a husband and father, of a man who loved and was loved in return, who cared enough to carry with him a small reminder of what he hoped to return home to. 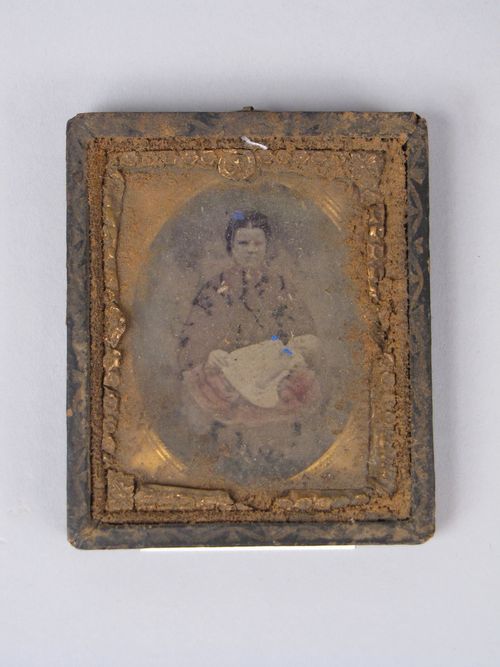 An ambrotype found on the body of a Union Soldier.

It is a reminder too, that he never made it back to the woman and child in the image. Did they ever know their loved one’s true fate? This was before the time of dog tags and dental records; many families would never find out exactly where their fathers and brothers fell or were buried. This object is, for me, a heartbreaking reminder of the costs of war and the sacrifices made.

We have these relics today because people were drawn to the battlefield in the days following the carnage and were seized with an impulse to remember, to save something from this event. We are drawn to that same battlefield and others like it today for the same purpose—to remember what transpired there and perhaps in some way to make our own statement to those whose possessions we have saved, that their sacrifices were not in vain, that today a place of death has been reclaimed as a place for recreation and learning, where families can vacation in happiness because of the very events that took place there. 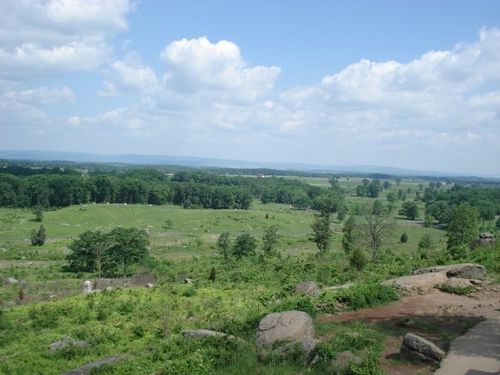 The view from Little Round Top today, taken by the author.

Our collective impulse to return to those battlefields can be seen as a way to honor those veterans who have sacrificed for us. These include the battlefields of World Wars I and II, Korea, Vietnam, Iraq and Afghanistan, and others that we cannot visit but whose soldiers’ sacrifices mean just as much, so much that we have set aside a day to drop our routines to remember and honor those who have served. So tell me—have you ever visited a battlefield, Civil War or otherwise? Or perhaps a collection of relics or objects like those in the Price of Freedom exhibit? What drew you there? And more importantly, what did you take from it? Unlike those early visitors, tourists today don’t leave Gettysburg with pockets full of relics. That doesn’t mean, however, that they leave with nothing.

Bethanee Bemis is a museum specialist working with the Armed Forces History Collections renovation and inventory project at the Smithsonian’s National Museum of American History.