On December 3, the museum announced the temporary closing of Bon Appetit! Julia Child’s Kitchen at the Smithsonian. The last day to see this popular exhibition, which features the 14-by-20-foot kitchen from the legendary cook’s Cambridge, Massachusetts home, will be Sunday, January 8, 2012. 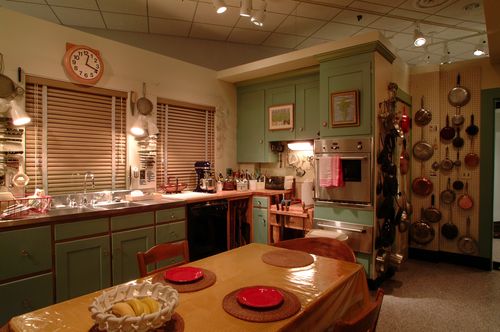 The next day, museum staff and volunteers will begin packing all of the tools, utensils, appliances, and gadgets that have been on display in the kitchen since Bon Appetit! opened in 2002. Everything will be carefully stored while a new and larger gallery space is prepared. In late summer, the kitchen will go back on view, with all of its parts and pieces exactly as Julia had arranged them before she donated the kitchen to the Smithsonian in 2001.

Over the course of the next several months, watch this space for news about the new exhibition. In the meantime, the museum team offers suggestions on how to cope for a few months sans Julia Child’s kitchen.

1. Visit the two NMAH websites about Julia Child: Bon Appétit! Julia Child’s Kitchen, where you can virtually explore the kitchen, its history, and many of Julia’s kitchen tools; and What’s Cooking?, which features curators’ stories of collecting the kitchen.

2. Remind yourself of Julia’s masterful cookbooks. Our favorites: Mastering the Art of French Cooking Volumes One and Two; The French Chef; From Julia Child’s Kitchen; Kitchen Wisdom; The Way to Cook; Baking with Julia; and Julia and Jacques Cooking at Home. Pick a recipe and cook it for someone or, better yet, invite someone to cook with you!

3. Make French bread (Mastering, Vol. Two). While you’re waiting for the dough to rise, watch reruns of Julia’s cooking shows on Public TV or get the DVDs of her early French Chef series.

4. Immerse yourself in Julia’s biography by reading about her life: Appetite for Life, by Noel Riley Fitch; Julia Child, A Life, by Laura Shapiro; My Life in France by Julia Child with Alex Prud’homme; As Always, Julia: The Letters of Julia Child & Avis DeVoto, edited by Joan Reardon.

5. Cook with the museum staff—check out our previous blog posts, which reveal how we challenged ourselves to cook our favorite Julia Child recipes in 2009. Get the inside scoop from George Washington University Museum Studies students who helped the museum team conduct condition surveys of hundreds of Julia’s tools and cookware in 2011.

6. Pour yourself a glass of wine and watch Julie and Julia, the 2009 film starring Meryl Streep, Amy Adams, and Stanley Tucci, and directed by Nora Ephron.

7. Brush up on your cake baking skills, because you’ll want to bake a cake in honor of Julia’s 100th birthday on August 15, 2012. May we suggest the exquisite Reine de Saba (Queen of Sheba) cake (Mastering Vol. One, and also in The Way to Cook)?

Posted in Food History, Behind the Scenes