Editor’s note: This is the fourth and final installment in a series of posts about designing the new exhibition The First Ladies, which opened on November 19, 2011. 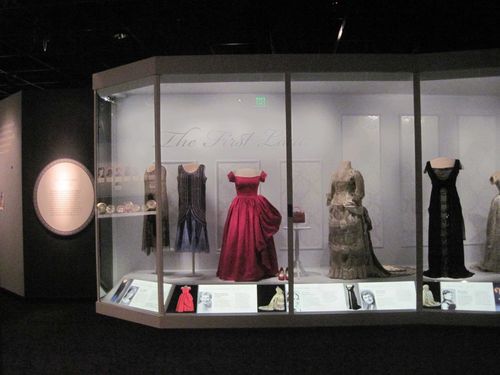 One of the remarkable aspects of this latest installation of the first ladies collection is that visitors are saying, “I can really see the gowns!” For the first time the Museum is using fiber optic lighting to illuminate all the gowns on display. These lights have an amazing effect on how well visitors can see the gowns. The quality of the light is clean and clear, with no ultraviolet or infrared radiation, and no heat produced inside the cases. All the fiber optics are positioned inside the cases, which are painted the palest shade of grey—nearly white. The internal lighting reduces the amount of glare on the glass of the cases allowing for improved visibility of the gowns. 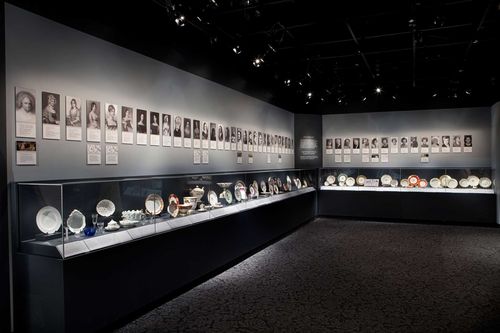 The nearly white color of the gown cases, paired with a white-on-white wallpaper treatment in panels within the cases, allows the colors and details of the gowns to be the primary focus of each case. The gowns, which vary widely in color and style, work well together when they are not competing with a strong background color. Not all cases are painted nearly-white, however. Close to 100 pieces of White House china, stemware and cutlery are all displayed on the darkest shade of grey, which accentuates their bright whites, golds, and other vibrant hues. The final section of the exhibition, “Changing Times, Changing First Ladies,” also includes dark grey backgrounds for smaller objects. I used the charcoal grey shelving in silhouetted pieces of furniture (similar to a Queen Anne “highboy”) as the way to display small objects. These nearly-black “highboys” are also lit internally with fiber-optics which produces a charming glow on the memento-like objects. 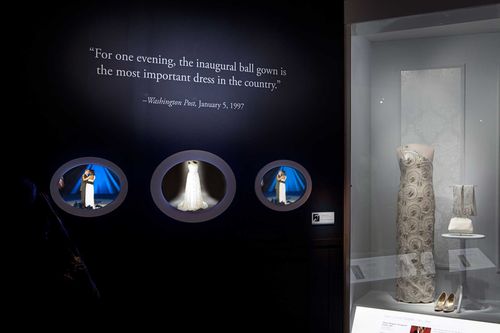 I worked closely with the curator to develop a presentation method for a video piece in the Inaugural section of the exhibition. The original concept was to have a life-size video display of the first ladies dancing at the inaugural balls. We researched 85” monitors, and we talked about framing an enormous monitor vertically as a doorway so that visitors could “peek” through the door into the ball. It became clear, however, that the available footage of these balls would not work at that scale, and I became concerned that the enormous monitor might overpower the gallery and the rest of the exhibition design. Discussions moved towards having a standard monitor in horizontal position to display the footage. Still, I was concerned that simply placing a standard monitor on the wall, in the middle of a carefully thought-out design where nothing else was designed to be standard, would be distracting and, in effect, “break the spell” of the exhibition.

After much rumination (which is a big and important part of the design process!) I took inspiration from the graphics I had designed in the shapes of oval “cameos” or “vignettes” and wondered whether perhaps the video could be broken into three pieces, and whether we could play them all at the same time within oval frames. I hoped that we could make the footage come to life in an appropriate way within the context of the exhibition. When the curator agreed to this concept, and when we presented it to Lifetime Television (who created the video pieces for us), the idea began to take shape. It was decided that the left and right screens would be slightly smaller ovals carrying the footage from the balls. The center screen would be slightly larger and would carry high-definition footage of extreme close-ups of details of the inaugural gowns. The two side monitors show the dresses in motion on the actual first ladies, and the center monitor shows amazing details of the dresses that might never otherwise be visible to the visitors. Most importantly, the overall effect of the videos does not distract from the exhibition; it actually adds dynamism and charm. My goal of making the exhibition gallery a place that feels personal, special, and immersively engaging is accentuated by the three-monitor video presentation.

Clare Brown is an Exhibition Designer for the National Museum of American History.