How do you want to be remembered after you’re gone? People often wonder what kind of legacy they will leave behind. Wanda Shalett found an answer to these questions at the National Museum of American History. 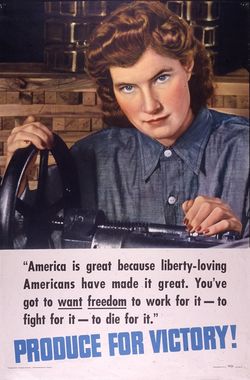 The story of Wanda’s involvement with the Smithsonian began in 1944. Wanda and her husband, Lew, were the owners of the Sheldon-Claire Company, which donated examples of its wartime incentive posters: “This is America… Keep It Free” and “Produce for Victory” (seen at left). These posters were later featured in the National Museum of American History’s traveling exhibition Produce for Victory and the accompanying book, Design for Victory: World War II Posters on the American Home Front by Harry Rubenstein and Larry Bird, curators of Political History.

Wanda’s relationship with the museum grew as the curators prepared for the exhibition and book, and continued throughout her life. From her home in Florida, she used to call the museum with news of the Palm Beach press coverage of Larry’s collecting activities related to the Votomatic Vote Recorder. She loved catching television coverage of Larry and Harry’s collecting activities during the presidential campaign. Wanda understood the importance of creating new collections that tell stories about current American politics and history.

Wanda’s sustained interest in the work of the museum led her to make a bequest in her will. Established in 2005, the Lew and Wanda Shalett Memorial Fund will provide support for the museum’s Political History Collection in perpetuity. In 2012, curators will use payout from this fund to travel to the Republican primaries in Iowa and New Hampshire, as well as the Democratic and Republican conventions, in order to collect this election cycle’s political memorabilia—an area that fascinated Wanda.

I find it inspiring how one individual’s gift can make a lasting impact on the future work of the museum, and how Wanda’s passion for political history was so strong that she wished to share it with future generations. If you would like to know more about leaving a lasting legacy at the Museum, please contact us.

Elizabeth Neville is an intern in the Office of External Affairs at the National Museum of American History.