When Humphrey Bogart achieved critical acclaim for his role as Sam Spade in the film noir hit, The Maltese Falcon, he acknowledged his stardom in a classically Bogey-esque manner by remarking: “You have to drag your weight at the box office and be recognized wherever you go.” Helping Bogart drag that weight was a production powerhouse by the name of Warner Bros. Studios. The symbiotic relationship between actor and studio was one that is reflected throughout the celebrated careers of the many Hollywood greats. Together, both entities succeeded in transcending national culture and identity through film, and communicated themes that underscored elements of real American life. Today, we are rediscovering these films as artifacts of history within the context of the greater American story.

Dwight Blocker Bowers, Director of Warner Bros. Festivals of classic Hollywood films and Curator of Entertainment Collections, sat down with Sarah Emerson of the Office of Public Affairs and shared his thoughts about classic films, Hollywood icons, and the significance of the cinema in American history. 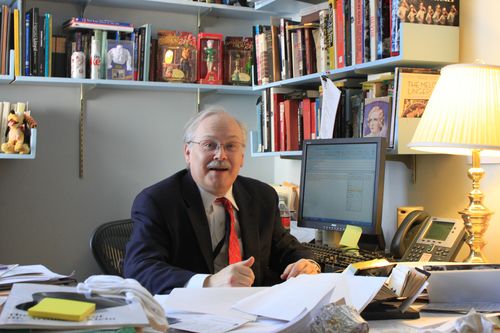 Roger Ebert said, “Every great film should seem new when you see it.” What makes a film quintessentially “classic?”

I would reply very similarly to Roger Ebert, though, unfortunately he said it first! A great classic film does feel fresh. I believe the challenges the film tosses at an audience are challenges that they regard as new, and that the film, by and large, has an appeal because of its newness, no matter how old it is. That’s the reason why I think silent films such as Don Juan and Intolerance, and the work of D.W. Griffith can stand that test, while others can’t.

Currently, many of us are streaming films online. This re-contextualizes the process of watching and experiencing movies, their plots and characters. Would you say that classic films, such as those featured in our Humphrey Bogart film festival, are fundamentally meant to be watched on the big-screen?

Yes, they were. The detail work is lost through online streaming. The large-screen experience, and the social experience, of witnessing these films on a theater screen with compatriots in the audience is something you cannot experience with home-video or DVDs. I’m adamant about the idea of the big screen. I think that is a benefit our festivals offer—the chance to see them as they were seen. We will also have a re-mastered print of Casablanca. Warner Bros. has removed the debris from the reel for the celebration of the 70th anniversary of the film, and we’ll be seeing it as close to pristine as is possible.

Humphrey Bogart is a seemingly complex and enigmatic individual. What have you learned about him that surprised you the most as a historian?

I am impressed by his longevity on the screen. Although Humphrey Bogart played a variety of roles, he was a distinct type, and that’s one of the things that I’ve taken away from my research. Actors no longer represent distinct character types or personas through their roles. I believe Bogart learned what he was good at through a great deal of the roles that he chose, or that he was given, because let’s face it, Jack Warner called him in and said, “You’re going to play this part.” Studios were very aware of their actors’ strengths, and they capitalized on them.

I think film noir is one of those terms that has sort of become misappropriated and lost in translation over the years. For those of us who aren’t familiar with film noir, would you mind defining it?

Its look is, perhaps, a bit dark and its attitude is slightly cynical. In its American incarnation, film noir narratives hinge on something of a crime-drama.

Watching classic films at the museum is an immersive and unique experience for movie-goers. What’s one thing that you hope visitors will take away from the Warner Bros. Theater film festivals?

I hope visitors come away with the impression that we curated some terrific artifacts called films. The most important thing for the public to realize is that these movies are artifacts, not just images flickering on a screen. They are artifacts existing in space and time and we should revere them in the same way that we do objects from presidential or military history. Movies are part of our culture and part of our daily lives and just because the narrative may not immediately speak to a contemporary audience doesn’t mean the experience of seeing a film wouldn’t. These classic films had something to say then and they have something to say now.