Day of Remembrance: An interview with Grant Ichikawa

Editor’s note: This blog is the third in a three-part series on the 70th anniversary of Executive Order 9066. Read about the program held here at the museum.  You can download the complete interview, and others, from our Podcast page. 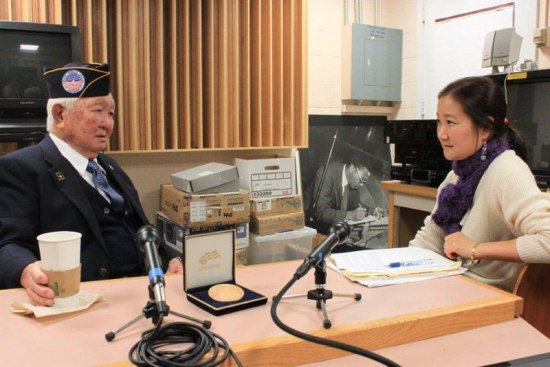 A photograph of my interview with Grant Ichikawa (left).

Grant Ichikawa, a 92-year-old Military Intelligence Service veteran, received the Congressional Gold Medal and is a living example of those who volunteered to join the army to fight for his country. Ichikawa affirmed, “I wanted to prove that I am a loyal American.” He is one of 3,000 Japanese Americans who served in the Asiatic-Pacific Theater as a front line interrogator, translator, communications interceptor, and as part of the Special Forces that operated behind enemy lines.

Ichikawa graduated from college in May 1941, just months before Japan’s attack on Pearl Harbor. He and his family were sent to the Gila River imprisonment camp (also known as Camp Apache) in Arizona. Soon after, in November 1942, he volunteered from behind the barbed wire to enroll in the six-month U.S. Army Military Intelligence Service (MIS) Language School. Following training, he was sent to Brisbane, Australia and was assigned to the Allied Translations and Interpretation Service (ATIS) to participate in the liberation of the Philippines. Immediately following Emperor Hirohito’s announcement of Japan’s surrender, Lt. Ichikawa communicated to 250 armed Japanese soldiers to surrender their weapons.

On November 2, 2011, the Congressional Gold Medal was formally presented to the surviving veterans at the U.S. Capitol Visitor Center in Washington, DC. Ichikawa received the medal on behalf of the MIS. According to Congress, “the United States remains forever indebted to the bravery, valor, and dedication to country these men faced while fighting a two-fronted battle of discrimination at home and fascism abroad.”

The Congressional Gold Medal is bestowed by the United States Congress, and along with the Presidential Medal of Freedom, is the highest civilian honor given in national appreciation for distinguished achievements and contributions. The medal will be preserved as part of the National Museum of American History’s permanent collections. 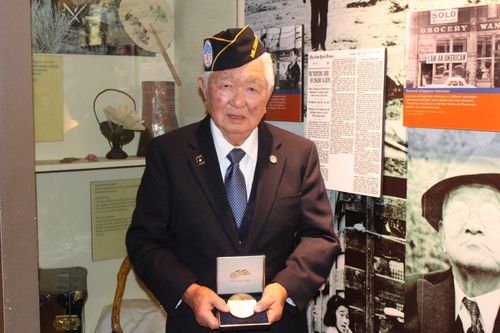 Grant Ichikawa holds his copy of the Congressional Gold Medal during a visit to The Price of Freedom: Americans at War.

To learn more about the Congressional Gold Medal awarded to Japanese Americans who served in World War II, visit the annual Day of Remembrance website. The Day of Remembrance event was held on Saturday, February 18, 2012 at the National Museum of American History, and featured objects, veterans, speakers, and a film at the Warner Brothers Theater. Visit our Podcasts page to download the full interview with Ichikawa.

Noriko Sanefuji is a program assistant in the Division of Work and Industry at the National Museum of American History.