Editor’s note: This is the sixth of a nine-part series that follows the European tour of one of the Smithsonian’s most treasured coins, the 1933 Double Eagle, affectionately known as “Our Girl.”

Where are they now? Curator Karen Lee and “Our Girl” arrived to chilly sunshine and a nice banner outside the National Museum in Warsaw, Poland, announcing the coin’s display. 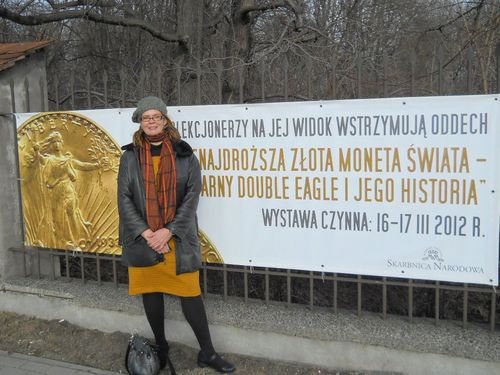 Karen Lee, smiling in the sun, outside the National Museum.

During her short visit to Warsaw, Lee did manage to get away from the museum and visit the Jewish Quarter in the city, learning something about life before and after the Ghetto during WWII. 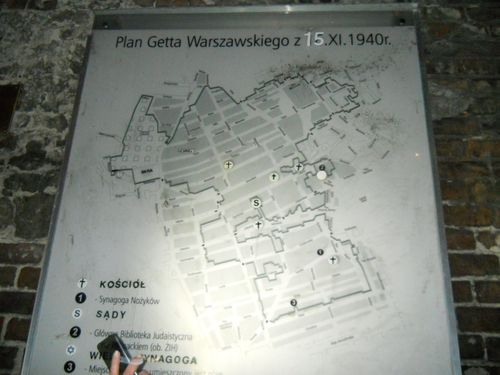 Signs with maps of the WW II Ghetto in the Jewish Quarter of Warsaw.

Upon receiving word from Lee that both she and “Our Girl” made it safely to Poland, the interns were eager to search through the National Numismatic Collection with senior curator Dr. Richard Doty to learn something exciting about Polish coinage. Little did they know that in this case, exciting meant BIG!

This enormous 100-ducat coin weighs about half a pound. That’s right—half a pound of gold. (“Our Girl” only weighs about an ounce—one sixteenth of a pound—but don’t tell her we’re talking about her behind her back.) Only a royal portrait would be fitting for coinage this large; King Sigismund III’s profile is struck on the front, or “obverse,” of the coin. 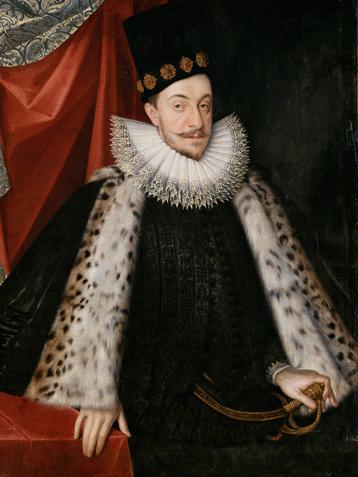 King Sigismund III by Martin Kober, 1590. Can you see the resemblance to the profile on the coin? Courtesy Kunsthistorisches Museum via Wikimedia Commons.

Reigning as King of Poland from 1587 to 1632, Sigismund was also crowned the King of Sweden in 1592. However, in 1599, Charles IX, Sigismund’s uncle, deposed him from that throne in a very Shakespearean move (the evil uncle and all that). Polish historians believe that Sigismund was obsessed with regaining the Swedish throne, as he continuously declared war on Sweden during his reign. Oh, more family rivalry!

Huge coins like this ducat were minted in Central and Eastern Europe from the 1500s to the 1700s, sometimes to commemorate important events, sometimes as awards or prizes to people for special services to the realm. In 1621, the year the 100-ducat coin was struck, Sigismund organized a peace treaty with the Ottoman Empire, ending a 20-year intermittent war. It is possible that this massive ducat was created in honor of the cease fire. 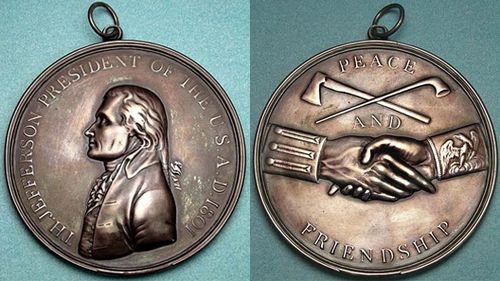 The National Numismatic Collection houses other peace medals, such as the above Jefferson Indian Peace Medal. This medal is even larger in size than the 100-ducat, but not as heavy. Lewis and Clark carried it on their journey west, from 1804 to 1807, along with many others presented to American Indian tribal leaders they encountered along the way, as tokens of peace and friendship. Imagine if they lugged 50 pounds of commemorative medals like the 100-ducat coin on their 7,689 mile journey. They might not have made it. The United States might not have expanded to California. And the California Gold Rush, which produced the gold for “Our Girl,” and the other 1933 Double Eagles, might never have happened. And then Lee wouldn’t be in Warsaw… and we’d have nothing to write about.

Next stop for Lee and “Our Girl”: Cultural Museum in Oslo, Norway!