Good King Wenceslas looks out on the Prague Museum

Editor’s note: This is the fifth of a nine-part series that follows the European tour of one of the Smithsonian’s most treasured coins, the 1933 Double Eagle, affectionately known as “Our Girl.”

Wow! The citizens and visitors of Prague have a genuine interest in coins. The lines have wrapped around the museum since “Our Girl” went on display—young, old, boys, and girls have all come out. 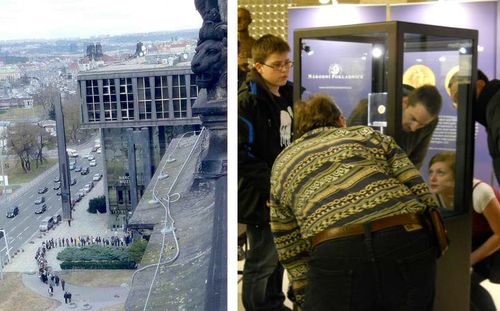 Left: Curator Karen Lee’s view from the roof of the National Museum of Prague, amazed at the line forming to see the 1933 Double Eagle. Right: At 10 p.m., the gallery is still full as the museum stays open late to accommodate the crowds.

The response is humbling for curator Karen Lee, especially because Lee’s grandfather left Czechoslovakia in 1921 for the United States. Upon her return to her ancestral home, with “Our Girl” in hand, she feels truly welcomed.

Prague, the capital of the Czech Republic, has been a center of politics, religion, art, and culture for centuries. The interns back in D.C. would respectfully like to convey their sincere envy for Lee and “Our Girl” as they take in the beauty of this modern city.

Instead, Sam and Betsy found a beautiful Czech coin in the National Numismatic Collection: 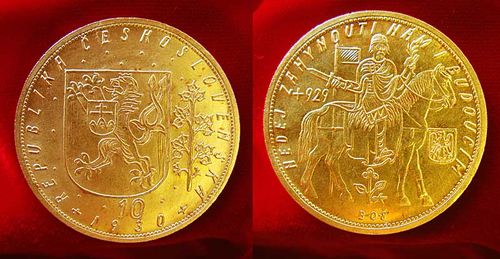 Wenceslas I on the back of a 1930 ten-ducat gold piece from Bohemia, housed in the National Numismatic Collection. Ducats were either trade or commemorative coins, used as money in several European countries.

Wenceslas I, a ruler of the Kingdom of Bohemia in the 10th century, is better known by his stage name from the popular Christmas carol “Good King Wenceslas.” He is remembered as a fair and just ruler who clamped down on the persecution of priests and supported the poor.

But one has to wonder about the definition of “fairness” in the Middle Ages. When Wenceslas was 13, he inherited his father’s position as Duke, but his mother, Drahomira, became regent in his place. Drahomira proceeded to have Ludmila, her mother-in-law, assassinated, worried that she was plotting with Wenceslas to overthrow her. When Wenceslas turned eighteen, he did overthrow her, then ruled for 16 years before he was assassinated by his brother. One big happy family. 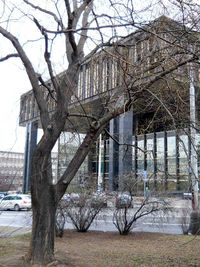 Lee’s search for a linden delivered only bare branches as it is still winter and the leaves have not yet sprouted in Prague.

The front, or what numismatists call the “obverse,” of the coin was struck with the Bohemian Lion and a linden branch on the right. The linden branch, or tree, is a national symbol of the Czech Republic. These trees are known to live for centuries in Europe.

This double tailed lion, a key character on the Czech Republic’s coat of arms, first made its appearance in the 13th century on the seal of the Přemyslid royal dynasty, which ruled over Bohemia from the 9th century until 1306, including the reign of Wenceslas.

Today the Bohemian Lion can be found all over in the Czech Republic, including on the jerseys of the national football team. Too bad Lee and “Our Girl” don’t have time to see a match! But there’s a statue of Wenceslas right outside the National Museum where our coin is displayed. 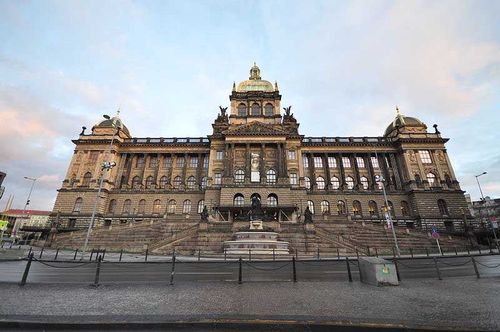 The façade of the National Museum of Prague.

Next stop on the tour: The National Museum in Warsaw, Poland.