Take your vitamins—Earth is about to be invaded! 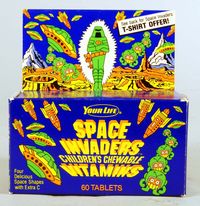 Space Invaders vitamin package (front). The nutrition label is on the top of the box, and the coupon for the t-shirt is on the back.

What is the first video game you remember playing? Some people may remember Pong or Pac-Man. For me, it was Super Mario Brothers and Bubble Bobble. Space Invaders was also the first video game for many people when it came out in the United States in 1978. Its popularity and influence earned it a part in the Smithsonian American Art Museum’s exciting new original exhibition, “The Art of Video Games” opening March 16. While working with the vitamin collection, I happened to find Space Invaders in the form of children’s chewable vitamins.

The invasion of the game Space Invaders was orchestrated by Tomohiro Nishikado for the Japanese game company Taito. The company carried out its plan swarming arcades in Japan in 1978, and found themselves in the United States several months later. The premise of the game is that a player controls a space station turret serving as the last line of defense from attacking aliens. Located at the bottom of the screen, the turret can only move left and right and fires lasers up the screen towards the alien invaders. Your objective is to destroy the aliens that are marching down from the top before they reach the bottom or “invade” the space station.

It is quaint and simple by today’s standards, with no voice acting, no spectacular 3D graphics, and no compelling narrative as one would expect from modern games. However, this game was revolutionary when it came out: it was the first to feature animated characters; the first to keep and record high scores; and the first to allow players to play endlessly, as long as they had at least one life and the aliens had not invaded the station.

This game was so popular in Japan that there was a shortage of 100 yen coins, most of them nesting in Space Invaders machines. In 1980, an American video game company, Atari, licensed Space Invaders from Taito. It was the first arcade game available to play on the Atari VCS (later renamed Atari 2600), which helped quadruple sales of the console. By the middle of 1981, the game raked in more than a billion dollars, or four billion quarters.

Considering how popular Space Invaders was both in the United States and in Japan, Taito decided to license the game and its world to increase profits. We expect pop culture characters from movies, TV, comics, and cartoons to appear as action figurines, on t-shirts, and other merchandise—but as a vitamin product? While unusual, this was not the first time. The Flintstones vitamin was introduced to the public in 1969 and is still in stores today. A Bugs Bunny version followed in 1971. Today, Disney and Marvel characters appear on vitamins. 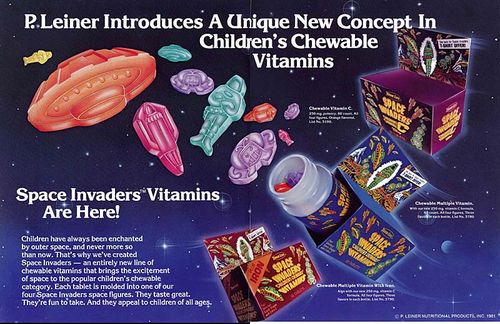 The inside of a four-page brochure given out to vitamin stores to convince them to carry Space Invaders vitamins.

In 1981, Taito trademarked the phrase “Space Invaders” specifically for vitamin products. P. Leiner Nutritional Products made and distributed the product starting in 1981 and continued at least into the following year. The actual vitamin contents do not particularly stand out, with the exception of Vitamin C, which had 625% of the recommended daily allowance dose to repel those invaders known as viruses. It was the draw of Space Invaders with the graphics on the box and a t-shirt offer on the back that would have enticed children to lobby parents to buy these vitamins. The shape of the vitamins pills appear in the form of an alien, a UFO, an astronaut, and a rocket. The astronaut and rocket do not appear in the game and must have been created to provide for more identifiable shapes. 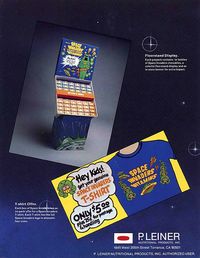 The back page of the advertisement for retailers touting an advertising stand with the offer for a t-shirt for five dollars.

Space Invaders might be one of the first games to license its “world” to other merchandisers, but it certainly wasn’t the last. Pac-Man, released in 1980, became an even more popular and contagious brand, resulting in “Pac-Man Fever.” In our museum collection, we have an assortment of Pac-Man collectibles such as t-shirts, a kitchen apron, a jigsaw puzzle—and yes, even a vitamin package. Later in the decade, a more identifiable and marketable character came along bearing the name of Mario, and his face soon appeared everywhere—but to the best of my knowledge, not in vitamins. The licensing of Space Invaders, Pac-Man, and Mario influenced the evolution of video games from a marketing perspective.

With these vitamins, the world may be safe from space invaders, but only until the next quarter is inserted.

Drew P. Robarge is museum technician in the Division of Medicine and Science at the National Museum of American History.