On the opening weekend of The Art of Video Games at the Smithsonian American Art Museum, my boyfriend and I lounged in the museum’s courtyard listening to the musical duo 8-Bit Weapon. They were playing chip music—a style that sounds like robotic electronic music. I was surprised when a few people got up from the crowd and started breakdancing. I thought breakdancing was done to hip-hop music on the street or at a party—not to video game music at an art museum. I was also surprised because I’ve been reading about breakdancing as part of my research into the origins of hip-hop music in the Bronx for the Lemelson Center’s upcoming exhibit on Places of Invention, and I didn’t expect my professional life to pop up in my personal life.

Part of why breakdancing in the museum courtyard seemed so unusual to me is that it’s so closely associated with hip-hop, not robotic-like music with auto tuners. After all, breakdancing was instrumental in the development of hip-hop music. Breakdancers flail their limbs, spin on their heads, and bounce their back or stomach off the ground. Dancers and observers encouraged DJ’s to try to extend the instrumental sections (breaks) of songs to allow individual dancers to showcase their talents. To extend the breaks, DJs invented ways of manipulating sound systems—turning the record player from a passive device that replays sound to an active instrument that creates sound. Record players no longer just played recorded music but, with the help of gifted DJs, created scratching noises, mixes of different breaks from different songs, and big, fat beats. Compared with electronic music, that’s a pretty different sound to dance to. Do the two types of music have a connection? 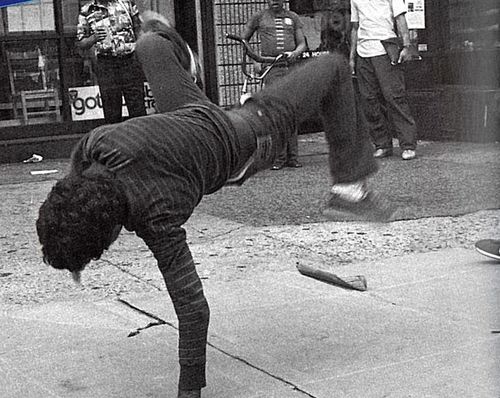 From Yes Yes Y'all by Jim Fricke and Charlie Ahearn. Photo by Henry Chalfant.

Breakdancing and hip-hop developed during the 1970s and early ‘80s in the Bronx neighborhood of New York City. It was during this same time period that the first generations of video game home consoles were being developed. Ralph Baer (whose documents are in the museum’s archives) developed the first console and released it to the public in 1972. Soon games were developed for both computers and consoles, and game systems like Atari and Magnovox came on the market. In the late ’70s, new consoles came out with clones of popular arcade games such as Space Invaders, Frogger, Pac-Man, and Donkey Kong. The consoles made in the early ’80s, such as Nintendo, had sound chips built into the systems to produce sound. Such early games used a continuous background soundtrack on a loop. These sounds and soundtracks form the basis of chip music—music created from vintage computers and video game consoles. Chip music composers such as the duo I heard in the courtyard, or the group interviewed for the Lemelson’s podcast series, Anamanaguchi, use sound mixers to mix, match, and manipulate sounds from sound chips to create songs. It’s a deconstruction and repurposing of video game music, which since the ‘80s, has evolved to become symphonic (like the music described in the first interview of the Lemelson’s podcast).

Breakdancing, video games, and computer-generated music were inventions from the same time period. More importantly, chip music is created using the techniques created by hip-hop music. In retrospect, their intersection at The Art of Video Games makes sense—breakdancing inspired hip-hop music, which created instruments and techniques that made it possible to create chip music, whose play on the day of the exhibit opening inspired people to breakdance. I’m really struck, and find it inspiring, that my research came to life in front of me, that it did so to video game music, and that it happened at the Smithsonian American Art Museum.

Laurel Fritzsch is a project assistant with the Lemelson Center for the Study of Invention and Innovation.