While millions will watch the Kentucky Derby this weekend, there was a time—before football, basketball, or baseball—when horse racing was perhaps America’s most popular sport. This 19th-century print conveys the same carnival-like atmosphere that is always a feature of the “Run for the Roses.” Then, as now, crowds of spectators from every walk of life cheer and bet on their favorites.

There are differences as well. The typical race in the 19th century, for instance, was four miles, not the mile and a half that is run at the Derby. While fierce competition between jockeys, trainers, and breeders is a timeless feature of the sport, in the antebellum period, races were fueled by political tensions—characterized by heated rhetoric between North and South over who was superior in equine breeding and training.

The rivalry extended back to 1823 when Henry, a Southern favorite, was defeated by the Northern champion Eclipse in a well-publicized race. By 1845, press and politicians encouraged a series of North/South match races that would capture passions from Maine to Florida. A challenge was issued in the popular weekly sporting journal, Spirit of the Times, that resulted in a May 10, 1842, match race. Fashion, a New Jersey-bred equine superstar nicknamed “Queen of the Turf,” defeated the Richmond-bred stallion, Boston, dubbed “Pride of the South.” Fashion won by 35 lengths, setting a world record. Inflammatory headlines such as “Northern Champion Defeats the great Southern Stallion” had Southerners demanding a rematch. 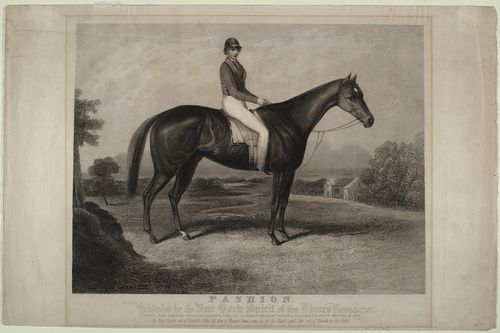 Fashion after an engraving by John Burford and published in the New York Spirit of the Times newspaper (circa 1842) from the Harry T. Peters America on Stone collection (60.2823)

Sensationalized as a “sectional clash,” promoters arranged a new match on Union Course in Long Island, New York. This was the same track as the Fashion/Boston race. Southern champion Peytona, an Alabama-bred chestnut mare, would compete against Fashion for a $20,000 purse. Originally named Glumdalclitch, Peytona was an inexperienced racing mare, famous for setting the record for winning highest single stakes—$35,000—in Nashville during the fall of 1843.

The race was run on May 13, 1845. Peytona traveled over 1,500 miles to compete against the eight-year-old Fashion. The victorious six-year-old Peytona demonstrated her famously long stride in the foreground; Fashion was trailing behind. The center of the track was crowded with people, carriages and wagons, but this scene doesn’t begin to convey the magnitude of the crowds—up to 100,000 attended—as reported in the rich news accounts and diary entries. One eyewitness lamented that views of the race could only be attained at “peril of life and limb,” and numerous accounts complain of traffic jams before and after the race. The New York Herald noted that the booths served all nature of refreshments to thousands of people of every class. Tents no doubt also housed numerous gaming and betting tables. The Herald commissioned eight reporters to cover the race, publishing an advance front-page story as well as four special editions.

The lithographic stone for the print was created by the artist Charles Severyn (active 1845-1860) and produced by lithographer Henry R. Robinson (active 1833-1851). Even though this image depicts a victorious Southern horse, it was popular with sportsmen throughout the country. Currier & Ives produced its own version of the lithograph from the same Charles Severyn drawing. This black and white lithograph, a proof before text and colors were added, appears to be closer to the Currier & Ives version than to the Robinson print. 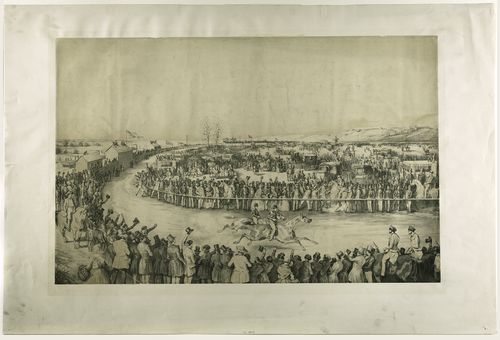 Lithograph, proof before letters and colors, [Peytona and Fashion] by artist Charles Sevryn from the Harry T. Peters America on Stone collection (60.2817)

Though the image endured, the Southern victory was short lived. Two weeks later, during the rematch in Camden, New Jersey on Wednesday, May 28th, Fashion beat Peytona, and the Southern champion came up lame.

Except for the first Peytona/Fashion match and a few less notable contests, most pre-Civil War matches were usually won by Northern horses. After the war, it would be the farms from the bluegrasses of Kentucky to the rolling hills and hunt country of Virginia and Maryland, which would fully establish Dixie’s reputation for superior equine breeding.

Debbie Schaefer-Jacobs is an associate curator in the Division of Home and Community Life at the National Museum of American History. She curates the Harry T. Peters America on Stone Lithography Collection, as well as the museum’s education collection.