On May 24, 1844, Samuel F. B. Morse sent an electrical message from the Supreme Court Chambers in Washington, D.C., to his associate Alfred Vail at the Mt. Clare railway station in Baltimore. The now famous message “What Hath God Wrought” was not the first telegraph message ever sent nor was this the first working telegraph, but Morse’s success caught the attention of the American public and made him an American hero. 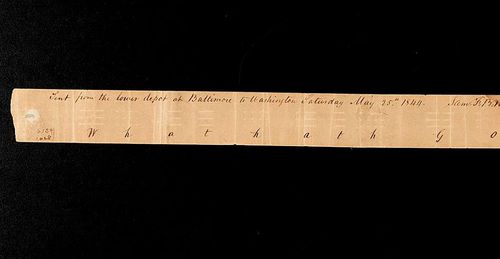 Morse was a moderately known artist before turning to telegraphy in 1832. While aboard ship returning from three years of art study in Europe, he became inspired by conversations with other passengers about electrical devices and began sketching. Those drawings recorded his thoughts about the possibility of sending messages by way of electrical impulses through a wire and included the first version of his binary code.

During the next four years, Morse studied electricity and settled into his new position as a professor at the University of the City of New York. In 1837 he constructed a transmitter and receiver using, among other things, a painter’s canvas stretcher. With the help of colleague Leonard Gale, Morse sent signals through ten miles of wire. Gale, familiar with electromagnetic studies done by Joseph Henry (later first secretary of the Smithsonian), helped Morse improve his designs. Soon thereafter Alfred Vail began working with Morse and added further refinements, including the use of a key and a dot-dash code. 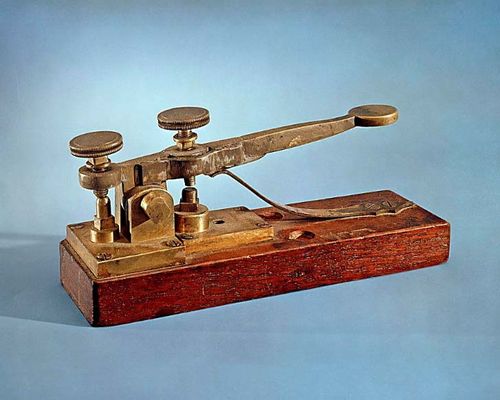 This 1844 telegraph key by Alfred Vail, improving on Morse’s original design, is believed to be from the first Baltimore-Washington telegraph line.

After five more years of work and many attempts to attract investors, Morse received an appropriation from Congress to construct the Washington to Baltimore line. Once opened in 1844, the business slowly grew. At first, some people did not believe there would be enough demand for telegraph messages to make the system profitable. Morse himself thought that the system would be best operated by the federal government but Congress declined to purchase the system. 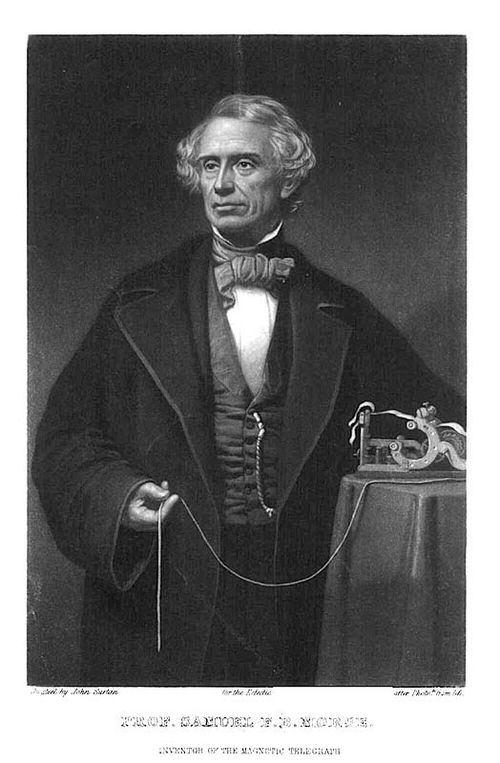 Ultimately various associates purchased rights to Morse’s patents and established the Magnetic Telegraph Company. Several other groups of investors established rival companies. Some used different types of telegraph instruments, some simply used Morse equipment without the inventor’s permission which led to a series of lawsuits. The U.S. war with Mexico (1846-48) proved the value of telegraphy to journalists and government officials alike and spurred massive investment. By the time Morse died in 1872 the system operated by Western Union included a network of lines that spanned the country and connected America to the world.

Samuel Morse was sometimes a controversial figure in his day. He twice ran for mayor of New York City and was defeated both times due to his anti-immigrant and anti-Catholic platform. Morse also argued in favor of the institution of slavery and published a pro-slavery tract in 1863, at the height of the Civil War. Despite his political views, Americans came to honor him as an example of American inventiveness and entrepreneurship. Characterizing Morse as either a hero or a villain would be easy by selectively focusing on only one part of the man. As a historian, I view him as a complex product of his time who must be viewed in that context. Today he is remembered for his creativity—an artist who became interested in a novel technology and helped lay the foundation for a revolution in communications that has since changed the world.

Hal Wallace is the associate curator of the Electricity Collections at the National Museum of American History.