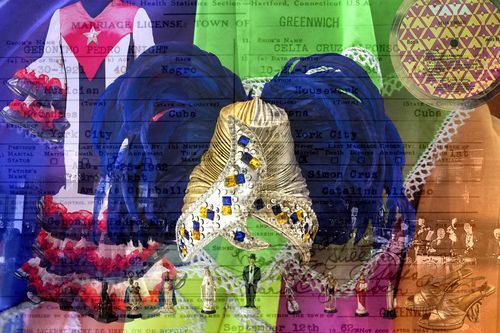 It's a pop of vivid color and glimmering textures, tinted with memories of home, heritage, and, most of all, music. This biographical portrait by artist Robert Weingarten depicts Celia Cruz, the Queen of Salsa, and was unveiled this morning. It will be on display until May 2013.

We hope you like it because you, readers of the blog, voted for it. We asked you to pick which of five iconic American figures should be memorialized in a new Weingarten portrait and Cruz's multifaceted story of immigration, music, and entertainment resonated with the most voters. "This was the first time I've agreed not to pick who I was working with," said Weingarten, who listened to Cruz's music as he worked.

Unlike most portraits, Weingarten's don't include an image of the subject. Instead, photographs of objects, documents, and other symbols that represent the person are layered into a composite image, conveying the individual's biography in a unique way.

Weingarten usually asks his subjects to give him a list of items that answer the question, "If you could do your self-portrait... what would be on the list that would represent you?" Photographs of the individual, their family members, and pets aren't allowed and the list must not include more than ten things. He describes this process as "somewhere between portraiture and self-portraiture." Blog readers provided Weingarten with a list in the case of the Cruz portrait and their comments revealed many ways of looking at Cruz's biography. The museum provided curatorial expertise and access to Cruz's objects in the collection.

This world cloud represents blog readers' comments about what was so important about the life of Celia Cruz.

"Celia left Cuba seeking freedom, which is the story of millions of Cubans," wrote one commenter. "However, Celia converted this pain into art—into cheerful songs which reminded all Cubans—even those inside of the island—about the beautiful things of the island."

Another wrote, "Nearly ten years after her death, her music is as relevant as ever. Her songs are played at every celebration I have ever been to (birthdays, quinces, weddings, etc...) because of their energy and their message. It makes sense that one of her final songs was 'La Vida Es Un Carnaval' (Life is a Carnival) because she was a symbol of hope to other immigrants."

Others referred to her modesty, her African-Cuban roots, her humanitarian work, her trademark "Azúcar!" shout, and her flashy, eye-catching wardrobe.

What artifacts and their meanings can you identify in Cruz's portrait?

Erin Blasco is an education specialist in the Web and New Media Department. She has also blogged about what makes curators laugh.