Was the Civil War high tech?

Editor's note: Civil War technology is the topic of this weekend's symposium, and some of the sessions may surprise you, particularly the one with "Civil War Planes" in its title. You can tune in to the symposium by webcast.

We don't usually think of the Civil War as high tech. But what else can you call a war that included instantaneous telegraph communication, speedy travel by railroad, portable printing presses, mass production of uniforms and military equipment, and aerial spies?

"It was arguably the first war that the United States got involved with that was really using the new technologies of the Industrial Revolution—steam tools, engines, telegraphy, the railroad," said Dr. Merritt Roe Smith of the Massachusetts Institute of Technology, who will give the symposium's keynote address on Friday, November 9.

Which Civil War technological innovation was most important? "Probably the railroad because it was so essential to getting supplies to the front," said Smith. "The north really held an advantage in that area."

But less visible forms of technology were also key. Although "we often associate mass production with Henry Ford," said Smith, "When you look at the Civil War, there are plenty of examples in which textile mills and gun factories were spewing out uniforms and firearms at mass production levels. That's a much more invisible type of change but extremely important to both sides." Mass production of uniforms, weaponry, and other essentials, "enabled both sides to raise large armies and keep them in the field over extended periods of time, whereas before that was just not possible. Napoleon had large armies but they couldn't stay in the field over long periods of time," he said.

For Bart Hacker, Senior Curator of Armed Forces History at the museum, rifled muskets were a key innovation. They "completely changed the way soldiers had to act on the battlefield," said Hacker, by improving long-range accuracy. "The old tactics of mass charges and such didn't work any longer," he said. "It took most of the war to figure that out. That's why in the late part of the war, trenches became such a major feature of the fighting particularly... as it was the best way to defend against long-range fire."

Inspired by the symposium this weekend, here's a look at three unexpected technologies from the Civil War.

This document, dated April 10, 1865, is an example of the prisoner parole pass printed and issued to some 28,000 Confederate soldiers at Appomattox Court House at the end of the Civil War. Note that three of the parole documents could fit on one page.

Speedy printing and communication wouldn't have been possible during the war without inexpensive portable tabletop printing presses, which were purchased by both Union and Confederate armies and navies. The presses were used for quickly printing orders and documents as well as unit newsletters.

One ad bragged, "From the ease with which they can be transported from place to place, they will be found exceedingly useful in the Army. Rear-Admirals Farragut and Goldsborough have them in constant use, and speak of them in the highest terms."

Of course, no matter how portable they were claimed to be, printing presses were sometimes abandoned on the battlefield.

Curator Joan Boudreau in the museum's Division of Culture and the Arts speaks on Saturday, November 10 on "The Portable Printing Press in the Civil War" as part of the symposium. 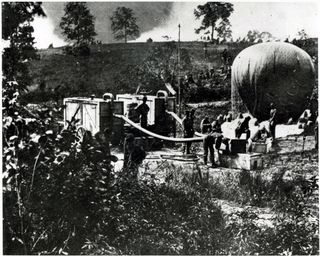 Thaddeus Lowe inflating his balloon "Intrepid" during the Battle of Fair Oaks.

When I think of reconnaissance by air, I imagine black-and-white photographs taken by high-flying planes during the Cuban Missile Crisis, but flying spies were also a fixture of the Civil War.

Balloonist Thaddeus S. C. Lowe demonstrated balloons' usefulness in reconaissance on the future site of the National Air and Space Museum, using a telegraph to communicate what he could see from his lofty vantage point. President Lincoln was impressed (in fact, he wanted to discuss ballooning all night and during breakfast the next day) and Lowe was appointed to organize a balloon corps within the Union Army. 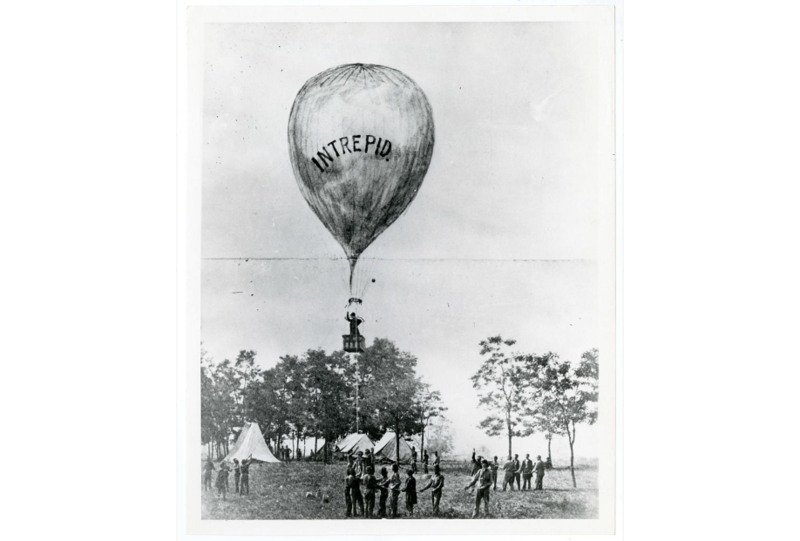 Image of Thaddeus Lowe’s balloon test of the "Intrepid" at the battle of Fair Oaks, Virginia, during the Peninsular Campaign, May-August 1862.

At the battle of Fair Oaks, Lowe's balloon spied on Confederate camps and troop movements, a test that was supported by Smithsonian Institution Secretary Joseph Henry, who served as President Lincoln's scientific advisor during the war. This was just one of thousands of reconnaissance flights Lowe and his balloonists made over the next two years. They even came under fire at Fredericksburg and Chancellorsville in 1863.

Tom Crouch, Senior Curator of Aeronautics at the National Air and Space Museum, will speak about "Civil War Planes: Dreams of Aerial Navigation, 1861–1865" on Sunday, November 11. 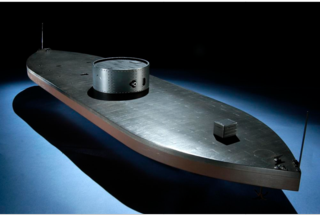 Model of the "Monitor"

When the Confederate States Navy raised the captured and sunken USS Merrimac at the Nofolk Navy Yard and converted it into an ironclad vessel, which they called the CSS Virginia, the U.S. Navy turned to John Ericsson, a Swedish engineer, for help in matching southern naval innovation. Ericsson produced three armored warships, including the USS Monitor.

Surprisingly, building Monitor from keel to launch took just 100 working days, an incredible accomplishment. The battle between the Monitor and Virginia at Hampton Roads, Virginia, may have been inconclusive, but it is often recognized as the battle that changed naval warfare.

On Saturday, Jesse Heitz of King's College London gives the talk "Southern-built Iron: The Union Blockade and the Confederate Ironclads Constructed to Break It" and Jorit Wintjes of the University of Wurzburg will discuss "The Spar Torpedo Boat in the American Civil War." Don't miss Gordon Calhoun of the Hampton Roads Naval Museum speaking on "USS Cumberland — Why She Really Lost to CSS Virginia on 8 March 1862" on Saturday.

Erin Blasco is an education specialist in the museum's New Media Department. Her favorite Civil War story is that of the Confederate blockade runner whose capture resulted in a delay in the production of Confederate postage stamps.