We asked a few of the museum's curators to share intriguing artifacts that represent romance in one way or another. Their picks include a sweet card, racy fire engine panel, and a stereograph image that says as much about perceptions of race in the late 1800s as it does about romance. 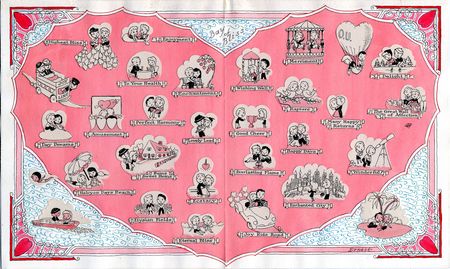 This Valentine's Day card is one of several that greeting card artist Ernest Dudley Chase created to give to Clara Holland, a widow whom he was courting in the 1930s and 1940s. Chase painted the cards in watercolor with elaborately cut paper embellishments, sometimes in multiple layers, and inscribed the cards with poems he composed poems especially for Clara. 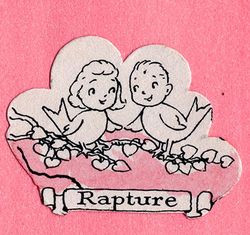 One of Chase's pet names for Clara was "Lovely Little Lady." He incorporated the letters "LLL" into many of his designs, as can be seen in the corners of this card. Ernest's intense feelings of love for Clara, combined with his gift for design, resulted in an extraordinary collection of handmade greeting cards he created for her, over 80 of which are in the museum's Archives Center. Sometimes worshipful letters accompanied the cards, which he sent on holidays, their anniversary, or for no reason at all. His Victorian sentimentality is shown clearly in the elaborate and flowery designs as well as the emotions expressed inside the cards.

Chase was a greeting card industry executive, author, mapmaker, graphic artist, and designer. Deeply invested, both professionally and personally, in greeting cards, his 1926 book includes this quote: "They are... the expressions, the personalities, transferred to paper, of their designers and makers, if not their senders. There is romance, poetry, art, love, friendship stamped indelibly into the greeting card... Countless almost as the sands of the sea are the messages borne on their surfaces..."

These exquisite handmade cards, created and customized for the woman he loved, provide a glimpse of the personal side of a man whose professional life was devoted to the greeting card industry. 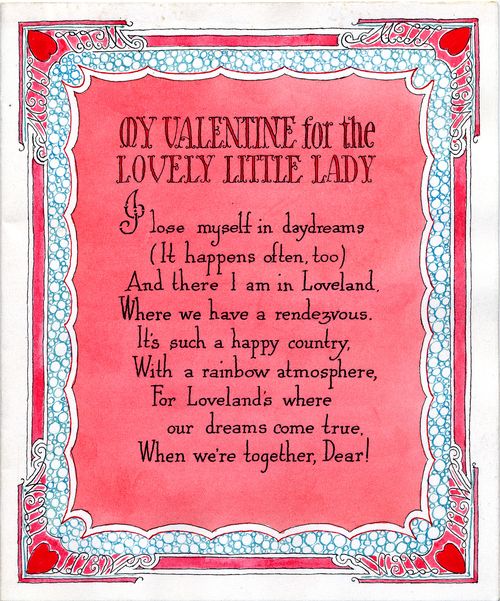 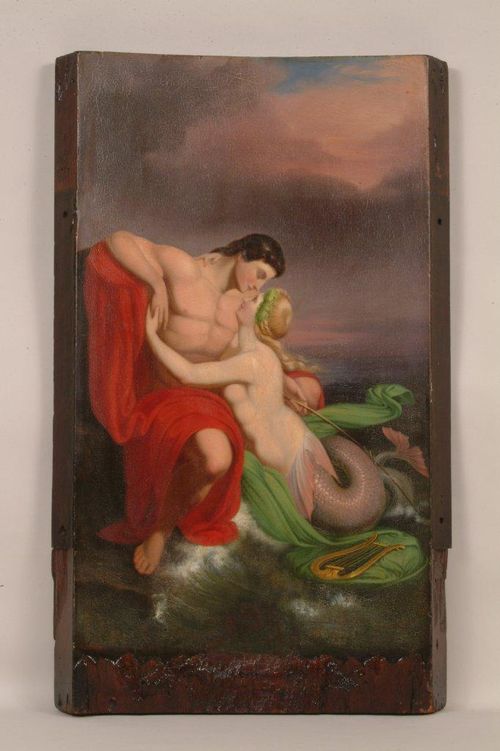 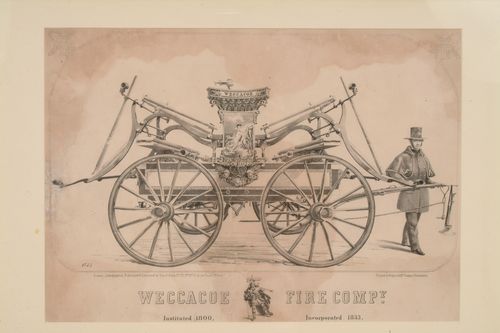 "The Mermaid and Her Lover" can be seen in its place of honor at the center of the Weccacoe fire engine in this print from the 1850s. Not only were the engines highly decorated, but so were the firefighters themselves, sporting a painted cape and decorated hat as part of their standard uniform.

This particular work is attributed to John Woodside, a prolific and talented sign painter based in Philadelphia, Pennsylvania. His highly romanticized image is likely based on the story of Clytie, a water nymph who fell in love with Helios, the Greek personification of the Sun. Helios is often conflated with the god Apollo, as Woodside has done here, and he includes a lyre and bow in this sensual scene, the classical symbols of Apollo.

The painted panel adorned the fire engine of the Weccacoe Fire Company of Philadelphia. Founded in 1800, it was one of many all-male volunteer fire companies that protected the city in the antebellum period, often in direct competition with one another. In a culture predicated on masculinity and heroic exploit, fire companies like Weccacoe employed such allegorical or classical depictions to both promote their virtues as firefighters and as a socially-acceptable means of displaying nude or semi-nude figures in public. 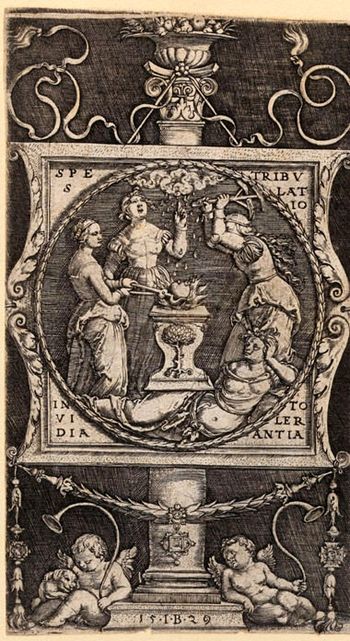 The Forge of the Heart, engraved by the Master I.B. in 1529, is a complicated emblem print considered to be an allegory encouraging patience in matters of the heart.

In the image, three women represent hope, tribulation, and envy. They use a blacksmith's tools to beat a flaming heart placed on an anvil. Another figure, tolerance, reclines below. The figures are enclosed in a decorative border hung from a column, balanced by two cherubs at the base. Measuring 148 x 84 millimeters (about 6 by 3 inches), it compresses a serious message into a small but highly detailed engraving. This print is included in an album of small German engravings assembled by George Perkins Marsh (1801-1882), a Vermont Congressman and Smithsonian Regent, who sold his print collection to the new Smithsonian Institution in 1849. 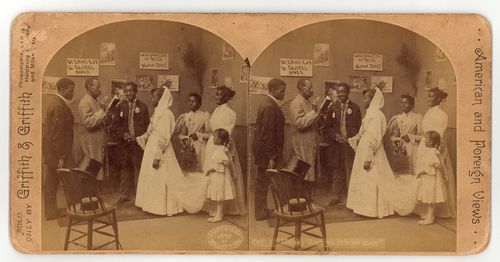 Honey, Does Yo Lub Yo Man? is a stereograph that reflects a white middle class view of African Americans in the late 1800s.

White middle class Americans valued the institution of marriage, but it was rarely recognized that slaves were married. As more African Americans were participating in those marriage customs and values after the Civil War, it made some white middle class Americans uncomfortable. To relieve the tension they used humor—at least what they saw as funny. By using a perceived vernacular language, the depth of the vows taken by African Americans was diminished. The price tag hanging from the groom's suit suggests that, while participating in the traditions of a marriage ceremony and buying a new suit, the groom was not fully versed in how to follow through on the etiquette.

These sorts of objects that make us uncomfortable today because of their racist overtones, are important to study so that we can better understand race in American culture, how stereotype humor functions, and how some popular misconceptions are promoted through images.

Want more? Explore our Pinterest board of Valentine-related artifacts.