Let's Talk Taco: How did Mexican-American food conquer the world?

Curator Rayna Green shares artifacts relating to an upcoming program on Mexican-American food. View the archived video of the program on UStream.

When you and your friends chowed down on Seven Layer Dip, guacamole, salsa, chips, and quesadillas during the Super Bowl last Sunday, when you last drove in to your favorite chain for those crispy orange tacos, or walked up to the new hip food truck for a kimchi taco, you might not have known you were part of a revolution. But revolution it is and revolutionary you are even if all you've done—like millions of others in the United States and a big chunk of the world—is expand your food repertoire to include foods derived from and inspired by the food of indigenous and modern Mexico. 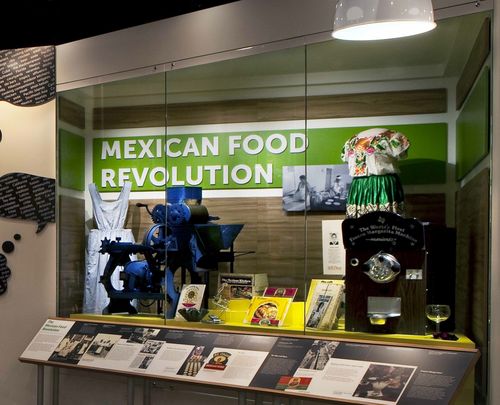 FOOD: Transforming the American Table, 1950-2000 features a section (pictured above) on the Mexican Food Revolution, which documents one of the major changes in what and how we eat. Through that exhibition case, public programs here at the museum, our website, and in recent research published by journalist Gustavo Arellano (Taco USA: How Mexican Food Conquered America) and historian Jeffrey Pilcher (Planet Taco: A Global History of Mexican Food), you and many others will find out just how much a part of the Mexican Food Revolution you've become.

Conception (Concha) Sanchez' tortilla-making apron, mill (molino), and tortilla press (tortilladora) from her California home tortilleria are up on the left side of the case. These tell of the small and community-based beginnings of "Taco U.S.A" (the subject Arellano will discuss in a webcast this Saturday). From her locally sold tortillas and tamales to the global spread of "Planet Taco" (the angle Pilcher takes in Saturday's program) of once regional Tex-Mex, we can follow the path of the revolution in the millions of frozen margaritas from Mariano Martinez' Dallas restaurant to the menus, cookbook, and frozen food served up by the Cuellar family's restaurant chain that stretches from Dallas to Dubai. 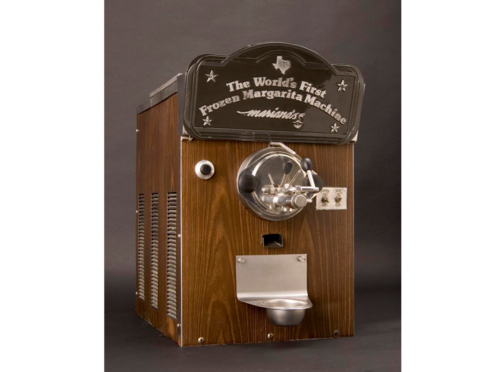 On the left, the tortilla press (tortilladora). On the right, the mill (molino).

In the middle of the case, we can see the popularity of Mexican-American food in Nordic Ware's 1960s packaging of The Mexican Kitchen, which included a tortilla press, a crispy taco fryer mold, a small taco salad mold (for those newly popular flour tortillas), and cookbook to teach the new Mexican food home enthusiast to make those restaurant dishes at home. And Art Velasquez' packaging and giant taco salad mold for the products from his new Chicago-based tortilla empire—soon on every grocery shelf—make you realize that the Tex-Mex restaurant in Paris and the Korean fusion taco from the food truck are not so strange after all. The rows of chips, salsas, bean and cheese dips in the grocery stores match up with the miles of tacos and burritos offered in fast food joints from California to Maine and everywhere in between. 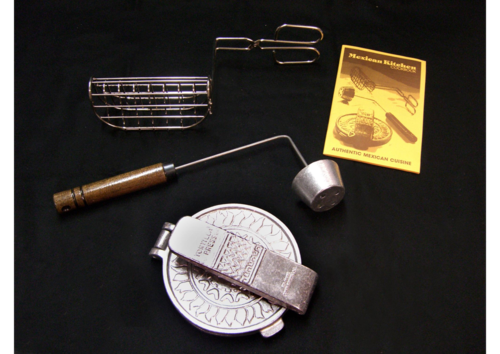 This Mexican Kitchen Cookware Set was manufactured by Nordic Ware in 1982. The set consists of three items: an aluminum tortilla press with a sun design, a taco maker including a wire basket to shape the tacos, and a cup shell former that holds down and shapes tortillas as they fry.

Like the chop suey and chow mein, the spaghetti and meatballs that came before them, the tacos and refried beans are American food. Just ask the Super Bowl fans still in a food coma from over-inhalation of Seven Layer Dip (and those gallons of Corona) if they realize just how much a part of the revolution they've become. Welcome to the future on Planet Taco.

Rayna Green is a curator, with specialties in Native American history and food history, who helped develop the new exhibition, FOOD: Transforming the American Table, 1950-2000. Tune in to our Taco Nation/Planet Taco: How Mexican-American Food Conquered the World! panel discussion webcast on February 9, 2013.