As road racing season takes shape in the competitive cycling world, a close look at the dramatic story behind a leading artifact

Competitive cycling is a test of strength as well as mental and physical endurance. Within the sport, there is no greater test than the Grand Tours, which were originally organized as circulation-boosting events by regional newspapers.

The Giro d'Italia (Tour of Italy) began in 1909. Like the Tour de France (Tour of France) and the Vuelta a España (Tour of Spain), it consists of a three-week long bicycle race comprised of daily stages. 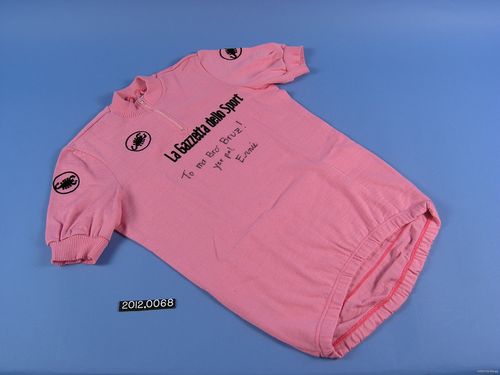 Pink "Maglia Rosa" leader's jerseys awarded to Andy Hampsten during the 1988 Giro d’Italia. A Grand Tour is not won in a day, although winning an individual stage is an honor. At the end of each racing day, the rider with the fastest overall cumulative time is awarded a colored leader's jersey and wears it during the next stage. The rider wearing this jersey after the last stage—at the end of well over 2,000 miles in 20-plus days of racing—has the fastest cumulative time and wins the race.

The only American to win the Giro d'Italia is Andy Hampsten, who won the race in 1988 while riding for the U.S.-based 7-Eleven Hoonved team.

The race's decisive moment came on June 5 over the Gavia Pass in the Italian Alps. The weather had deteriorated and despite snowplows clearing the road prior to start time, sleet and snow demoralized the riders as they struggled through the 75-mile-long mountain stage.

Near the base of the Gavia Pass, another rider asked, "You're not gonna attack are you?" Andy was in 5th place, only trailing the leader's time by 1 minute and 18 seconds. Andy said: "I just looked at him ... and I didn't say ... a word ... they knew damn well I was going to attack."

Soon into the start of the climb, Andy attacked, alone. The roads over the Gavia Pass and descent to the town of Bormio were treacherous, with narrow roads, unpaved sections, and steep gradients. These proved to be the ideal conditions for Andy's attack and he immediately distanced himself from his rivals.

Despite being pursued and eventually passed by Eric Breukink, the Dutch rider who won the stage, Andy finished far enough ahead of the previous day's race leader to be awarded the pink "Maglia Rosa" race leader's jersey, which he kept through the finish of the final stage on June 12.

The museum was fortunate to acquire one of the pink "Maglia Rosa" leader's jerseys awarded to Andy Hampsten during the 1988 Giro d'Italia. The race leader is awarded a new jersey in a ceremony for every day they lead the race, but they usually ride in the first jersey awarded. The extras are given away as gifts. The jersey donated to the museum was originally presented as a gift in 1988 from Andy to Bruce Hildenbrand, a sports writer and photojournalist.

The 1988 "Maglia Rosa" jersey was the last year wool jerseys were used and was made by the Castelli Cycling apparel company. It bears the name of La Gazzetta dello Sport, the Italian newspaper that first organized the race in 1909. A handwritten inscription on the jersey reads "To ma Bro' Bruz!" and is signed with Andy's nickname, "yer pal, Ernie."

Andy's winning Giro d'Italia jersey is not currently on display, but his inspirational ride remains alive for cycling fans and those who remembers his bravery. The next time life places an ice-covered mountain in your path, think of Hampsten's courageous attack and willingness to suffer for the prize and a place in history.

Corey DiPietro is a museum documentation specialist and assists the Division of Culture and the Arts to collect and research American competitive cycling.