Teaching with drama: The Time Trial of Andrew Jackson

Jason Fox, an AP U.S. history and psychology teacher, explains why he came to class dressed as Andrew Jackson and let his students put him on trial.

My entire teaching career, I've followed the premise that attention equals retention. So, when the opportunity to learn new ways to engage my students through the Teach-it-Forward program was brought to my attention, I jumped at the chance. While I went through the summer seminar, I had an opportunity to learn new ways of integrating drama in my classroom activities and it was exhilarating to see history taught through the affective domain instead of simply dead worksheets and other people's interpretation of events.

The single most powerful event for me at the seminar was The Time Trial of John Brown. For a fleeting 30 minutes, 150+ years of history faded away and I felt as if the real John Brown was transported into the room. 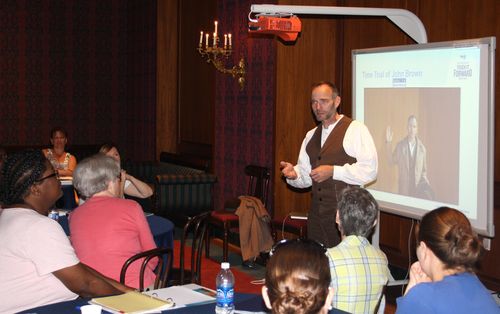 Actor Terry Averill portrays John Brown during the Teach-it-Forward Institute. Brown was a radical abolitionist in the mid-19th century. He advocated violence to combat slavery and led armed insurrections that would lead to his execution.

The individual playing John Brown absolutely mastered the character and I found myself frantically analyzing his motives based on the events of the time. The individual portraying Brown carried a great amount of intensity with him and this naturally piqued my attention. I knew immediately that this lesson was one that was easily adaptable, interesting, and potentially memorable for my students.

I started off by dividing the class into groups based on topics related to Andrew Jackson including national unity and sectionalism, economic ideas including the Bank war, Indian Removal Act, and the changing the role of the presidency. After viewing and discussing some primary sources to encourage conversation, students then drafted questions to ask Jackson on their specific topics.

My students are used to seeing me as relaxed and proper. When I came in the class energized, in costume, and using Jackson's quotes in context, they were every bit as awake as I was when I heard the John Brown time trial. Ultimately, this lesson forced my students to analyze Jackson as a real human being with all of the faults and qualities that he possessed.

In this video clip, teacher Jason Fox portrays Andrew Jackson and defends himself against his students' tough questions.

Even weeks later, students would come to me and ask how Jackson would have felt about the bevy of caretaker presidents who followed him, or what he would have done if he were president in 1860 instead of James Buchanan.

In my AP class, students often focus on simply getting a grade and moving on while missing the real goal of education for its own sake. This lesson forced my students to apply historical knowledge and rewarded them intrinsically. Teachers often portray caricatures of people in history in order to simplify it to their students. This lesson, on the other hand, forced my students to see an extremely polarizing historic individual in a truly human light. 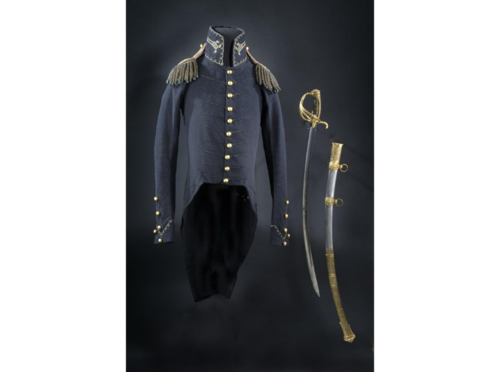 Andrew Jackson carried this sword and scabbard while commanding the American forces, which included Tennessee militia, U.S. regulars, and Cherokee, Choctaw, and Southern Creek Indians during the Creek War in the War of 1812.

I plan on doing a similar presentation of a legacy trial of either President Lyndon Johnson or President Richard Nixon in a couple of months. If you know about a figure from history as an individual, you'll know how carefully I have to be to pick out quotes for school appropriateness… Nevertheless, I'm really excited about them and grateful to the museum for the opportunity to learn and share.

Jason Fox is an AP US history and Psychology teacher at CD Hylton High School in Prince William County, Virginia. He is a National Board Certified Teacher and was a participant in the museum's Teach-it-Forward Institute, a training program for local educators. In our "time trials," the public is invited to explore and debate a historical figure’s legacy with a historical interpreter, such as this trial of Benedict Arnold's legacy. Check out our post Teaching with Drama for more ideas for using theater in the classroom.